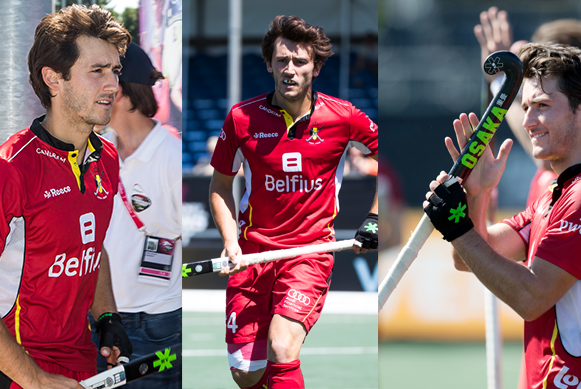 Since making his major competition debut at the 2012 Champions Trophy in Melbourne, Australia, just two months after his 18th birthday, Belgium’s masterful defender Arthur Van Doren has developed into quite possibly the most celebrated player of his generation.

A driving force in the Red Lions’ relentless rise from eighth position to the top of the FIH World Rankings in just six years, Van Doren’s sensational individual performances – marked by his remarkable ability to turn defence into attack in the blink of an eye – has seen him singled out for special praise in a team packed full of world class talent.

Van Doren’s dazzling displays at the Olympic Games Rio 2016, where Belgium took the silver medal, lead to him being named 2016 FIH Male Rising Star of the Year. That brilliant achievement was topped in 2017, when he was named both the FIH Player and FIH Rising Star of the Year, becoming the first athlete in hockey history to win both prizes – a staggering feat for then 23-year-old.

Whilst being rightly proud of the ever-increasing number of individual accolades coming his way, a silver medal behind hosts the Netherlands at the 2017 EuroHockey Championships – where Van Doren was named Player of the Tournament – left Belgium still searching for their first major title, and some commentators questioning whether this phenomenally talented team had the mental strength to finally get their hands on some deserved silverware.

In 2018, Belgium’s epic wait for a major title finally came to an end at the Odisha Hockey Men’s World Cup in Bhubaneswar, India, where the Red Lions silenced the doubters by beating the Netherlands in a thrilling shoot-out final to become world champions for the first time in their history. As expected, Van Doren was at the epicentre of the triumph, being named Player of the Tournament and, a few months later, voted FIH Player of the Year for the second successive year.

2019 was another hugely memorable year for Van Doren, the highlight being a starring role as Belgium claimed their first ever EuroHockey Championship, winning the title on home soil in Antwerp. He also helped the Red Lions to take the silver medal in the inaugural FIH Hockey Pro League, won the Dutch club championship with HC Bloemendaal and was shortlisted for the FIH Player of the Year Award alongside team-mate Victor Wegnez. Now 25 and with over 180 international appearances to his name, Van Doren – who’s younger brother Loic, 23, is a goalkeeper for the Belgium national team – is approaching the peak of his powers and looks certain to be at the heart of Belgium’s ongoing quest for glory for many years to come.

Speaking to FIH.CH about his career to date and more, Arthur Van Doren explains that his Belgian team will be doing everything in their power to win that coveted gold medal when the delayed Olympic Games Tokyo 2020 gets under way in 14 months’ time.

Hi Arthur, thank you for talking to us! Who or what first influenced you to pick up a stick and play hockey?
Arthur Van Doren: “Good question! It was my uncle, actually. My uncle gave me my first stick when I was five years old, so he was actually the one that introduced me to the sport. He was playing it at the time, and looking back at it I am pretty happy, of course! It has given me a lot of friends and made a lot of very good memories playing it.”

Who has been the biggest influence on your career and why?
Arthur Van Doren: “A lot of people have had a really important influence on me. Looking at my career, I’ve had the luxury of playing in some very good teams, both in the club and the national team. Also, [I’ve had] the right people at the right time in my development as a hockey player. So, to single out one is maybe too difficult, and unjust to some people, so I really couldn’t say one name.”

How would you best describe your playing style or attitude on the pitch?
Arthur Van Doren: “It is a question that perhaps you need to ask other people or my colleagues! I guess what I try to do is make the people around me play better as well, try to keep calm and collected in decision making, and try to provide the right rhythm of the game for the team, and do my job to the best of my abilities. That makes a good theme, and it is still a team sport so that is definitely the most important thing.”

What moment on the pitch are you most proud of and why?
Arthur Van Doren: “I think one of the most iconic moments, and one I am most proud of, is probably the [2018] World Cup. We were already, over my years, very ambitious; we also weren’t afraid to say that we were ambitious and that we wanted to win a big tournament. We lost a few finals, which made a lot of people doubt, but that [doubt] wasn’t in our team. We were still confident that we could win a big tournament, and that World Cup [victory] was such a special moment. It was the first time the Belgian national hockey team won a big trophy, and it was a big trophy for the whole of Belgium. To be part of that team was pretty special at that time. I still love playing the style of hockey we play. It’s just nice, attractive and positive hockey. I think that was a very special moment, for sure.”

What would be the best advice you could give to aspiring young hockey players?
Arthur Van Doren: “What I always say to the young kids that ask me that, or just young kids looking up to us, is that having fun is the most important thing, especially at a young age. You’ve got to have fun, enjoy going out there with friends and enjoy that team spirit, that vibe, that is created. The more fun you have, the more you will practise it, the more you will play hockey. The more you play hockey, the better you will get at it. The better you’ll get at it, the more fun you will have. I think that makes the circle round, so what I always say is try to enjoy it, even the moments that are less fun. It all contributes to you being a better hockey player and a better person. It all starts with that. That is always the most important thing for me also, I just try to enjoy everything that comes my way.”

The ongoing COVID-19 global health crisis has had a profound effect on every aspect of life, sport included. Have you been able to resume any level of on-field training activities with the Red Lions?
Arthur Van Doren: “The protocols have been pretty strict, with a lot of rules and rightly so, of course. We were not allowed to have ‘full combat’ training, we were training under the social distancing rules of 1.5 metres, which is different. It was fun to go out there again, see a lot of the guys again. It had been a long time, because of the lockdown, so it was nice to go out there. I think everyone is starting to get eager to have those one-on-ones, the more combative stuff. Everybody is ready for that, but we’ll have to wait until everything is cleared and we are allowed again. Of course, COVID-19 has had a big influence on athletes and on the planning, as well as on everybody. We will try to stay positive, see what we can do and how we can evolve ourselves and be better every day. It is what it is, so we’ll try to move forward. We have 14 months [until the start of the delayed Olympic Games Tokyo 2020] to be a better team and be better hockey players, so we’ll try to make sure that that is the way to go.”