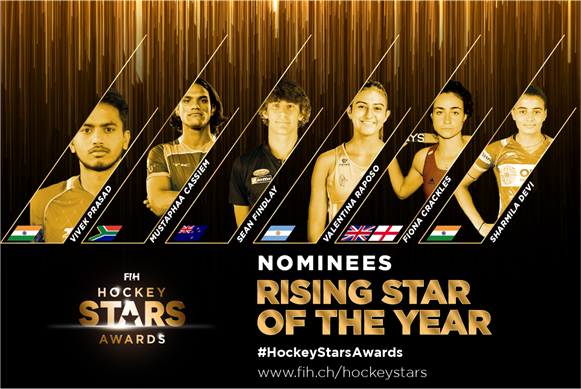 The nominations for the FIH Rising Star of the Year Award for 2020-21 feature some of the most exciting young players on the planet, with the six candidates – three men, three women – representing all five hockey playing continents. All six were took to the field at the Olympic Games Tokyo 2020, showcasing their fantastic abilities on the world’s greatest sporting stage.

The men’s award features representatives from Africa, Oceania and Asia, with two newcomers joining a previous winner of the coveted prize.

South Africa’s remarkable attacking displays at Tokyo 2020 won the hearts and minds of hockey fans the world over, with 19-year-old Mustaphaa Cassiem very much marking his arrival as one of the sport’s brightest young stars. A rapid, skilful forward, Mustaphaa found the net against European champions the Netherlands and eventual Olympic gold medallists Belgium before scoring what proved to be the winning goal in a sensational 4-3 triumph against four times Olympic gold medallists Germany. Both he and 22-year-old brother Dayaan had exceptional tournaments and represent a very bright future for South Africa’s men.

Sean Findlay is the current New Zealand Under 21 Player of the Year, and his fine performances at the Olympic Games Tokyo 2020 have earned the 19-year-old a fully deserved place on the FIH Rising Star shortlist. It is a remarkable rise for this versatile and energetic midfielder, who only made his Black Sticks debut earlier this year but marked it with a goal, firing home against Australia in an Oceania derby match before proving his worth on the world’s greatest sporting stage. The Black Sticks have a real gem on their hands – it will be fascinating to see how he develops over the coming years.

It has been another stellar year for young India star Vivek Prasad, the winner of the 2019 FIH Rising Star of the Year Award. He was consistently brilliant in India’s midfield throughout their Olympic campaign in Tokyo 2020, showing a level of calmness far beyond his 21 years. Skilful, quick thinking and creative, Vivek has proven to be a key player in Graham Reid’s excellent India team and will be hoping that the Olympic bronze claimed at Tokyo 2020 will the first of many medals.

Like the men’s award, the three nominees for the women’s Rising Star of the Year Award come from three different continents, with Europe, Asia and Pan America all being represented.

It has been a remarkable start to the international hockey career of Fiona Crackles. Following a superb Great Britain debut against the Netherlands in the FIH Hockey Pro League in late 2020, helped the team to a creditable draw against the undisputed best team in the world, Crackles is now a pivotal player in the GB set up. Winning an Olympic bronze medal in only her second major competition is a dream start to what promises to be a long and fruitful international career.

Nineteen-year-old Sharmila Devi has every reason to feel incredibly proud of her excellent performances with the Eves at Tokyo 2020, her first major international tournament. The lively attacker was a thorn in the side of every opposition defence that she faced, with her trickery and driving runs causing havoc whilst creating numerous goal-scoring opportunities for her team-mates. A fourth-place finish in Tokyo was a heart-breaking moment for this hugely gifted player, but her fine displays may have heralded the arrival of a new superstar.

One of the true break-out stars of the Olympic Games Tokyo 2020, 19-year-old Valentina Raposo showed a level of maturity that belied her youth, looking as if she had been playing at the heart of the Argentina defence for many, many years. As well as being a brave and brilliant defender, Raposo – now the proud owner of an Olympic silver medal – also proved herself at the other end of the field with superb penalty corner strikes against Spain and Germany. She looks to have a very bright future ahead of her.