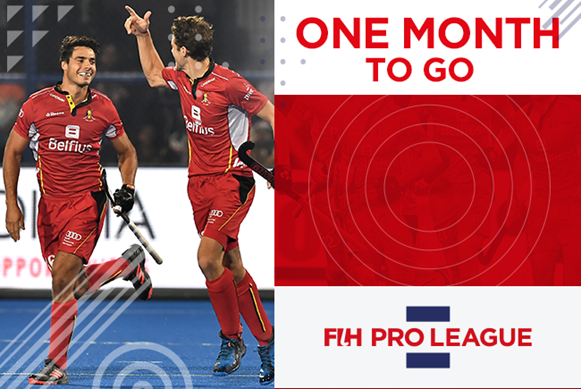 Lausanne, Switzerland: In exactly one month’s time the FIH Pro League – the ground-breaking home and away league involving many of the world’s leading hockey nations – will get underway when newly crowned men’s world champions Belgium travel to Valencia to take on Spain.

The battle between Belgium’s Red Lions, who defeated the Netherlands on Sunday to win the Odisha Hockey Men’s World Cup Bhubaneswar 2018, and the Red Sticks of Spain on Saturday 19 January 2019 will be the start of a very special six months for our sport.

Over 20 venues across 11 nations will play host to a staggering 144 international matches, providing a global spread of world-class hockey, across multiple time-zones, from January to June in a competition that is very much seen a genuine game-changer for hockey.

The ‘power of home’ will be key to success in this event, with packed stadiums throughout the season providing a huge boost to the nine men’s and nine women’s teams competing in the FIH Pro League, giving fans the chance to watch their nation taking on the world’s best in eight matches on home soil. Tickets for these home and away matches are being purchased in their thousands, while millions of hockey fans and general sport lovers will be able to tune in to the action via a global network of broadcast partners as well as on the new FIH.live platform which will be launched on 10 January 2019.

After the completion of the 144 matches that will feature in the ‘League’, a further eight matches will then be played at the showpiece Grand Final, which will take place at the Wagener Stadium in Amsterdam, the Netherlands between 27-30 June 2019. The winning men’s and women’s nations will be crowned as the FIH Pro League champions and will receive the single largest financial prize in the sport.

Belgium – who on Tuesday received a glorious homecoming by thousands of fans who flocked to Brussels’ iconic Grand-Place to celebrate the arrival of both the team and the newly-claimed World Cup trophy – will be rightly regarded as one of the pre-competition favourites. It is hardly surprising, with the squad selected by Head Coach Shane McLeod containing superstars from Bhubaneswar such as team captain Thomas Briels, Vincent Vanasch (FIH Goalkeeper of the Year 2017) and penalty corner ace Alexander Hendrickx, not to mention Arthur Van Doren (FIH Player and Young Player of the Year 2017), the man named player of the tournament at the Men’s World Cup in India.

Although Spain – who Belgium will meet in the opening FIH Pro League fixture on 19 January at Valencia’s Estadio Betero – did not enjoy the happiest of times in Bhubaneswar, the squad selected for the FIH Pro League by Head Coach Frederic Soyez is packed full of players determined to show the Red Lions and the world that they are very much a force to be reckoned with. Hugely gifted young attacker Enrique Gonzalez is a player capable of hurting any team, while the vast experience coming from veterans Pau Quemada, Miguel Delas, Sergi Enrique and goalkeeper Quico Cortes ensures that the Red Sticks remain a very dangerous side. It promises to be a fascinating fixture, kicking off a wonderful six months of action.

The Estadio Betero will also be the venue for game two of the FIH Pro League, with Spain’s men facing Great Britain on 25 January. The GB team features the vast majority of the England side that Head Coach Danny Kerry guided to a fourth-place finish in Bhubaneswar including Phil Roper, Liam Ansell and goalkeeper George Pinner.

The third match of the FIH Pro League is the first match of the women’s competition, with focus switching from Europe to South America as Belgium’s Red Panthers travel to Cordoba to play Argentina in front of an impassioned crowd at the Estadio Municipal de Hockey on 26 January. As always, Las Leonas’ squad contains some of the superstars of the world game including shot-stopper Belen Succi, midfield dynamo Maria Granatto (FIH Young Player of the Year 2016 & 2017) and sensational forward Delfina Merino (FIH Player of the Year 2017). While Argentina might be seen favourites to get their competition off to a flying start, Belgium’s women have made great strides forward in recent years and have some superb players of their own, including team captain Anouk Raes, Louise Versavel, Jill Boon and goalkeeper Aisling D’Hooghe.

Other key individuals named include some of the award winners from the recent Odisha Hockey Men’s World Cup Bhubaneswar 2018, with best goalkeeper Pirmin Blaak (Netherlands) as well as joint top scorers Blake Govers (Australia) and Alexander Hendrickx (Belgium) all being named by their respective teams.

Netherlands’ women’s Head Coach Alyson Annan has selected a fiercely strong squad in a bid to add the Pro League crown to the World and European titles that her brilliant team have claimed in recent years, with the extraordinary Lidewij Welten joined by true global stars such as Kelly Jonker, Eva de Goede and Xan de Waard. However, with Argentina, Australia, Belgium, China, Germany, Great Britain, New Zealand, and USA all in the fight for the title, the task for the Oranje is certainly not straight forward by any means.

To see the squad lists in full, click the following links: Men | Women.

You can visit the TMS event pages for the FIH Pro League by clicking the following links: Men | Women.

To see the confirmed match schedule for the FIH Pro League, which includes links to ticket sites for each of the matches, please click here.

For information about how to purchase tickets for the FIH Pro League matches, please click here.