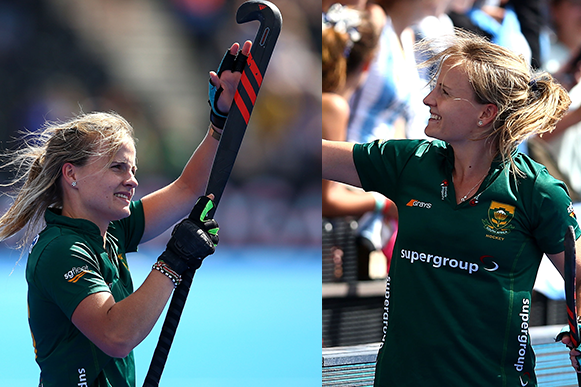 Erins on the hunt for international competition

Erin Hunter has been captain of the South Africa women’s national team for just over a year and in that time she and her team have experienced a rollercoaster of emotions.

At the FIH Series Finals in Valencia, South Africa needed a top-two finish to ensure a place at the Olympic Games Tokyo 2020. A great start to the competition saw the South African side take top spot in their pool but a strong performance by the home team, Spain, in the cross-over matches meant the best South Africa could hope for was third place. A dispirited team were then outplayed by Italy and so finished fourth.

The team picked itself up for the African Hockey Road to Tokyo continental qualifier, where they stormed to victory. At this stage, the team still didn’t know if they would be going to Tokyo. To the complete joy of Erin and her team mates, their participation was confirmed after an agonising wait for a decision from the government department responsible for Olympic sport (SASOC).

Erin captains a squad containing a lot of experience. Five players have more than 100 caps and two have more than 240 caps apiece. But, with 59 senior internationals to her name, the 28-year-old defender is a calm, inspirational figure on the pitch and a thoughtful and warm character off it – although her final answer in this interview may suggest otherwise!

The interview focuses on South Africa's participation in the forthcoming Olympic Games. For Erin, who is a teacher when not on international duty, missing a long period of competitive hockey after a serious injury to both quadriceps in 2014 has doubled her desire to compete on the international hockey stage against the best of the best.

Note: the interview with Erin Hunter was carried out before the current lockdown restrictions of Covid-19.

How are preparations going for the Olympic Games Tokyo 2020?
Erin Hunter: For us, as a team who don’t often get international competition, it has been really, really, cool to get some teams out to play in South Africa at the beginning of the year. Unfortunately, like the rest of the world, all international competition has stopped for now but we are trying to be as creative we can be to make sure we are preparing as well as we can in our country. So we will be as prepared as we can be for the Olympics.

What does it mean to you and your team to be taking part?
Erin Hunter: For me, as with any athlete who is going to compete at the Olympics for the very first time, it is an ablate dream come true and only Olympic athletes can and will understand. It is an absolute honour and an absolute privilege. For our team, we weren’t sent in 2016 so for all of those who worked for 2016 and are finally getting the chance to go to the Olympics, it is unbelievable and something we hold close to our hearts  and something we will not take for granted.

What are your thoughts about the teams you will face in your pool?
Erin Hunter: Being the South African women’s hockey team we know we are going into the competition as the lowest ranked team there (World Ranking:16), so we know it will be extremely tough, especially as we have the number one in the world (the Netherlands) in our pool. So we are not going to go in there looking to win every single pool game but we are looking to get one or three points from some of the opposition that we have targeted. And we are looking to sneak something in there so we can make it through to the quarters.

What in part of the Olympic experience are you and your team most looking forward to?
Erin Hunter: I think for us, we are most looking forward to taking on the best of the best and being able to compete at the highest level we can possibly compete at in hockey. It is just an honour to take to the field to represent our country in the best way we can on the biggest stage there is.

Looking at where you are now and where you hope to be, what are the main areas that you and your squad will be working on between now and the start of the Games?
Erin Hunter: Hockey being a completely unprofessional sport in South Africa, we are just hoping to get in a lot of contact time together as a squad and as a team so we can prepare. That will help us improve our consistency and make sure we are all on the same page. So for us, the biggest thing we need in order to prepare between now and the Games is just [spending] time together and making sure we do everything we can to be the best team we can be.

A fun final question: Are there any crazy team superstitions or pre-match rituals that you can tell us about
Erin Hunter: We do have a couple of fun superstitions and things we do before a game. They are very African and based on where we come from but I can’t share them with you because I would have to kill you!