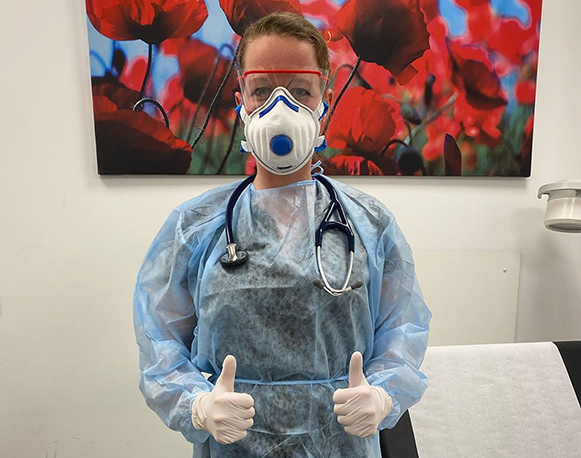 Not so many years ago, Joyce Sombroek was widely regarded as the finest goalkeeper in women’s international hockey. With the Netherlands she won every major prize the sport has to offer, becoming a European champion in 2011, an Olympic champion in 2012, a World champion in 2014 and being named FIH Hockey Stars Women’s Goalkeeper of the Year both in 2014 and 2015.

After retiring from the game following a silver medal at the Olympic Games Rio 2016 due to a persistent hip injury aged just 26, Sombroek put all her energies into completing her medical studies at the Vrije Universiteit in Amsterdam. Now, the former shot-stopper finds herself on the front line of a global health crisis, playing a key role in the fight against the COVID-19 pandemic.

“When I finished my studies almost two years ago, I started working in the Internal Medicine, Pulmonary, Cardiology and Gastro-Intestinal departments”, said Sombroek, who made 117 appearances for the Oranje between 2010 and 2016. "After that I went to the Emergency rooms at a big hospital in Amsterdam to become more experienced in acute situations and traumatology. But since the start of March, I started training to become a General Practitioner [GP], where a lot of the healthcare in the Netherlands is performed, and we currently find ourselves in a very special situation.”

Working at a medical practice in Aalsmeer, a town located 13 kilometres south-west of Amsterdam, Doctor Joyce Sombroek spends her days largely focused on helping those who might be suffering with COVID-19. Initial contact with patients is made via telephone in order to determine whether hospital treatment or a home visit is required. If it is the latter, Sombroek - or one of her colleagues – will assess the patient wearing a protective suit to help slow the spread of the virus. Luckily, the majority of people have mild symptoms, meaning that they can stay at home.

It is a challenging, chaotic time for everyone working in the medical profession, but Sombroek is unswervingly positive, determined to play her part in this unprecedented situation. “A lot of people have to stay at home, and I feel grateful that I can help others. We are preparing as well as we can and it’s slowly getting busier. Much of my [GP] training has been cancelled, but the most important thing is providing care to those who need it. I’m really happy that I can do my job, and I think that accounts for everyone working in healthcare or other vital jobs.”

Sombroek talks openly about the incredible camaraderie amongst her healthcare colleagues whilst also being greatly moved by how other organisations are contributing to the effort, praising the support provided by everyone from the Dutch Armed Forces to the Dutch Olympic Committee (NOC*NSF), with the latter recently making a very significant gesture. “The NOC*NSF have provided the athlete cooling vests they had for Tokyo 2020, to keep healthcare professionals, who are wearing protective suits all day long, cool”, explains Sombroek. “They have also provided Slush Puppy machines. I really like that people are being proactive and creative as they try to help with this situation. There are so many stories like that, where people are coming together to make a difference.”

Regarding Tokyo 2020, Sombroek feels the difficult choice to postpone the Games to 2021 was the “one and only right decision” the organisers could make. “I understand it was a difficult one because it is really complex. One or two months ago I still thought that it could happen, but the virus spread very quickly. It is such an important event, and everyone works towards it for many years, so it is a shock for the athletes and people who are involved. But you want the Olympics to be fair, for everyone to be healthy and you want fans to be there. I think it is a good thing that it will be held in 2021 and not cancelled completely, which would have been devastating. It is something really positive that we can all look forward to next year, and I’m sure it will be an amazing event.”

Having competed at both London 2012 and Rio 2016 as a player, Sombroek was set to have a very different role at Tokyo 2020, combining her love of sport and medicine as a doctor at the ‘TeamNL Tokyo Center’, the central hub where Dutch sports fans gather in their thousands throughout the Games. “I am still hoping to be there next year, and it will be amazing to be part of it. Hopefully I can get the chance to cheer for my former team-mates and maybe see some other sports whilst there. In the future I’d really like to combine being a General Practitioner with sports medicine, as I still really like working toward goals with a team of motivated people.”

For now, thoughts of Tokyo are very much on hold. Alongside her incredible, fearless colleagues in the medical profession, Sombroek is fixated on the task in hand and wants everyone to look after each other as much as they can, despite the obvious challenges. “While there is a physical distance between many of us at the moment, it is still so important that we try to stay together by staying connected. We all need to help each other, so focus on the things you can control and stay positive and resilient. Things will be better!”