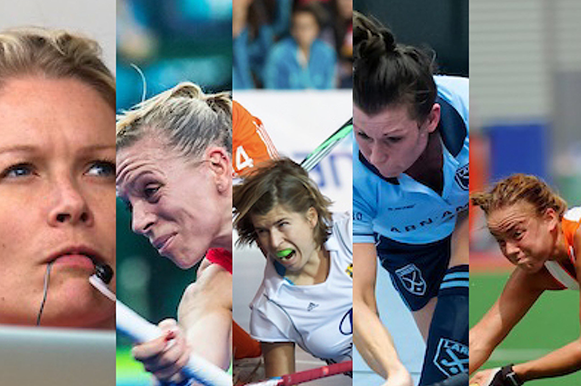 COVID-19: Isolation no barrier as Hockey Family gets creative on social media

With people all over the world currently using social distancing or in isolation to reduce the impact of the COVID-19 virus, the hockey family has been finding ingenious ways to stay active, practise their skills and spread the word about staying safe.

Literally thousands of videos and images have been shared on social media by the hockey fans and players across the globe, and here is a small selection of the themes. The positivity is truly astonishing – we salute each and every one of you!

1: The game-face challenge
The game-face challenge asks people to post a photo of their face during a sports game and has taken Instagram by storm, with major global sporting icons uploading some genuinely fantastic – and occasionally hilarious – images of themselves in action. The European Hockey Federation (EHF) got everyone talking with the amazing in-game facial expressions of EHF Hall of Famers Natascha Keller, Teun de Nooijer, Kate Richardson-Walsh, Santi Freixa, Nikki Symmons, Jerome Truyens, Maartje Paumen, Pol Amat, Julia Müller and Moritz Fürste. Get involved by using the #gamefacechallenge hashtag.

2: Tag and share your best hockey moment
The stay at home campaign has given our athletes an opportunity to look back at the archives and share some of their favourite moments from their career, whilst also nominating fellow athletes to get involved. We have seen so many athletes sharing throwback moments on Instagram stories, with Maddie Hinch, Rachael Lynch, Eva de Goede, Delfina Merino and PR Sreejesh amongst the contributors.

3: Work-out videos
If you have been looking for unusual ways to work out like an international hockey player in these unusual times, you certainly have plenty of videos to choose from. Dutch attacking ace and 2015 FIH Player of the Year Lidewij Welten has been posting some hugely impressive #stayathomechallenges for you to try, while a video of Belgium striker Jill Boon doing press-ups with a goat on her back has to be seen to be believed!

4: Skills and tricks videos
Some of the world’s finest hockey players have been showing off their skills in recent weeks, from dribbling around cones, sticks and plant pots in the garden to weaving around tables and chair legs in living rooms. Current stars like Argentina’s Agustina Albertarrio and Felix Denayer of Belgium have been keeping people entertained, with all-time greats such as Jamie Dwyer, Alex Danson and many others doing exactly the same. As part of the #hockeyathome challenge, Ireland duo Nikki Daly and Ali Meeke showed great creativity by making an obstacle course using raw building materials. If you are looking for something slightly different, we’d recommend you take a look at the #IsolationOlympics videos put together by Great Britain striker Sam Ward, who has given his own unique take on sports such as Cycling, Fencing, and even … Show Jumping!

5: #StayAtHome
Whilst there has been plenty of fun and games, a huge number of international players have been working hard to spread the crucially important messages of how to look after yourselves at this time. A video featuring individual messages featuring numerous Argentina women’s players such as Delfina Merino, Carla Rebecchi and has proven a big hit in South America, while India goalkeepers PR Sreejesh, Krishan Pathak and Suraj Karkera have also posted about the importance of washing hands and using hand sanitisers at this time.