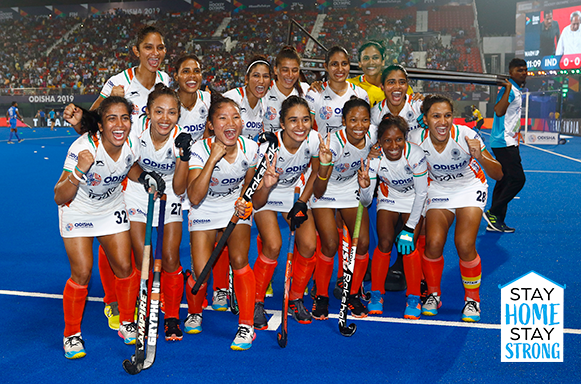 In the latest example of the hockey family’s efforts in the fight against the COVID-19 global health pandemic, a fundraising initiative by the India women’s national team is helping to feed more than 1000 families of poor and migrant workers whose livelihood has been affected during India’s lockdown.

On 17 April 2020, India’s Eves launched an 18-day fitness challenge to raise funds for charity whilst simultaneously encouraging people to adapt to an active lifestyle during lockdown. When the challenge ended on 3 May 2020, the team had raised over two million Indian Rupees, which equates to around 26,000 US dollars.

"The response we have received was really overwhelming,” said India team captain Rani. “People, especially Indian hockey lovers from across the globe took part in the challenge and contributed for the cause. On behalf of the team, I would like to thank everyone who took part in this initiative to help the poor. It was heartening to see many Hockey India Member Units, legends and former India hockey players show their support by taking part in this initiative and we are truly grateful."

The challenge saw team members coming up with different fitness tasks, ranging from burpees, lunges and squats to spider-man push-ups, pogo hops and more. Each day, a player initiated a new challenge and tagged ten different people on their social media handles, all of which were encouraged to take up the challenge and donate 100 Indian Rupees to the fundraiser. India vice-captain Savita explains more.

"Initially when we discussed about this challenge with our chief coach [Sjoerd Marijne] and understood how online fundraiser works, we didn't think that the outcome would be so immense”, said Savita. “But we saw people's support grow day-by-day. Many of them would send us messages and patted our backs for taking this up and it encouraged us more. We would also like to thank Hockey India, our chief coach Sjoerd Marijne and entire support staff for backing us in this initiative, which we felt very strongly about because most of us in the team come from very difficult financial backgrounds."

The money raised by India’s Eves was donated to the Uday Foundation, a Non-Governmental Organisation based in New Delhi which provides basic necessities for those in desperate need of support. As well as food in the form of dry rations, the funds will also be used to provide sanitary kits that will include soaps and hand sanitisers.

Congratulating the team for their initiative, Hockey India President Mohd. Mushtaque Ahmad said: "It is very heartening to see the Indian women's hockey team take up such a thoughtful initiative. I have been informed that hundreds of people have already benefitted from this cause and have received dry rations, this makes us extremely proud of the players. The team has shown that sports people always have a big heart and come forward to help when needed. I not only congratulate the team on behalf of Hockey India, but I’d also like to thank them for taking this cause up and feeding the needy."

For more information about the Uday Foundation, please click here.