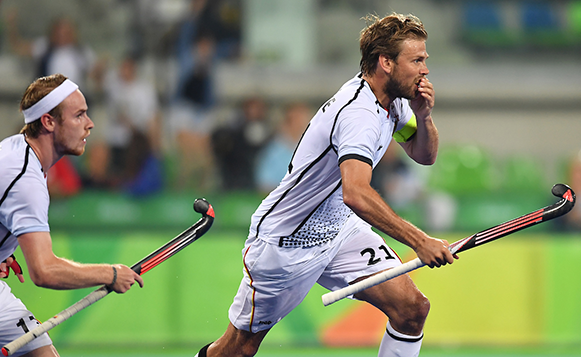 In part one of a special two-part interview, iconic Germany midfielder Moritz Fürste – the double Olympic gold medallist (Beijing 2008, London 2012), world champion (Mönchengladbach 2006), and the FIH Player of the Year for 2012 – talks about his recently announced comeback as well as offering some reflections on a sparkling career.

You are coming out of retirement to play in the Belgian league for Beerschot. Tell us how that came about
Moritz Fürste: “I would have never thought of coming back and playing hockey again. I didn’t play for the last two years, at all. But in life, it’s all about timing, and the timing was just right. I was starting to miss it, [the] corona [virus] hit the world and my company, which organises sports events, and we’ve moved most of the events to next year. Due to what I do here, organising fitness events, I’ve stayed pretty fit. I was working out; our sport is called Hyrox [an intensive bodyweight training programme], and I was doing training sessions for most of the time over the past couple of years. So, I feel like I can still try it, and the club was kind of desperate because they needed a player and couldn’t get anyone who was actually playing because all of the leagues have started, and it was very short notice last week. So, I spoke to my family and my partners here and decided, why not! Let’s try it again and play again. I am really excited about it because I have no idea if I can still trap a ball or do a pass – I have no idea!”

You said that you are a bit worried about whether you will be able to trap a ball. I’m sure it will come back to you pretty quickly!
Moritz Fürste: “Hopefully, yes! I was discussing that with the coach of Beerschot to be honest, because I literally have no idea. I have never stopped for such a long time. I quit tennis for 16 years when I focussed on hockey, and when I started playing tennis again … I still don’t remember how to properly hit a back hand with two hands, so I hope it will not take me two years to understand again, because this will be a one-time project, definitely. But in the end, I just hope I pick it up quickly so I can help the team.”

You had an enviable playing career in which you won every major international prize in the sport, including becoming a double Olympic champion, a world champion and the FIH Player of the Year for 2012. Do you find it hard to choose a favourite moment?
Moritz Fürste: “There is no highlight, I always say that. For me, it’s all about memories. There are no good or better memories, they are just memories. You cannot compare titles, like the Olympics. In Germany we have a saying that you cannot compare bananas and apples, because they are both fruits, but they are completely different things.

“I won a German indoor title in 2018, in my very last season [for Uhlenhorster Hamburg]. I hadn’t won a German title before that in my career. I won every title there is in international hockey, but never a German title. But we won it in 2018 with a real ‘comeback’ team, with three guys that I won the EHL [Euro Hockey League] title in 2008 and 2010, but then they quit. But they came back for one season, and suddenly we won this championship. Those memories and the story behind that, in a way, is ‘up there’ in my positive memory part of my brain.”

One of your first major titles was the 2006 Hockey World Cup, which was held on home soil in Mönchengladbach. That event must hold a special place in your heart.
Moritz Fürste: “I was the youngest player on the team, I scored a goal in the semi-final and the final. And then, being handed over the world championship trophy at the end – I don’t think I even knew back then what that meant. For me, I was like 21, just going there. The coach said, ‘okay, you can play now’, and I was a young kid. I just wanted to play, so I did. And then we won the world championship. If I’m looking back at it now, sometimes I feel that I would like to experience that again with the knowledge and experience that I have now, because things would have been completely different. But then again, maybe not. Maybe it all worked out because I wasn’t thinking it through so much.”

Whilst you won so many prizes in your career, you also lost a few big matches along the way. How do you reflect on those experiences?
Moritz Fürste: “Apart from the Olympic Games, I lost every final there is in world hockey. Everything. World Cup, European Cup, EHL twice, Champions Trophy twice, German championships six times. Apart from the Olympics, I lost every final at least once. Yes, we won a few things, but I was always realising what it means to lose important matches.”

Part 2 of our interview with Moritz Fürste will be published in the coming days.