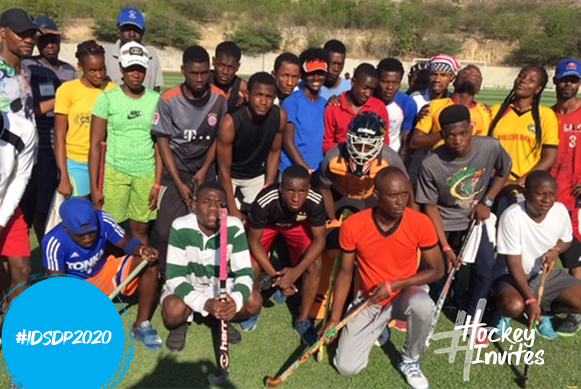 Shiv Jagday is a coach of many years experience. He has been national coach to both Canadian and USA national teams and now runs coaching courses and creates coaching videos and manuals.

Since 2015, as part of a PAHF initiative to develop hockey in underprivileged areas of the continent, Jagday has been regularly visiting Haiti to deliver coaching and playing programmes

Haiti itself was hit with devastating force by an earthquake back in 2010, with many, many lives lost and the destruction of an enormous amount of buildings and facilities. Hockey has been one of the sports that have been used to help rebuild society - and Jagday’s work continues that trend.

The first two visits in 2015 and 2018 were primarily focused on introducing hockey to would-be coaches and teaching them how to deliver coaching sessions. The third visit, earlier this year, was carried out again on behalf of PAHF but also as part of the Olympic Solidarity programme – which aims to support national associations, particularly those with the greatest needs.

The most recent visit saw Jagday coaching 25 junior players as well as providing coaching support. In total, the veteran coach has seen more than 100 male and female coaches go through his education programme.

The partnership between the Haiti Hockey Federation – which was formed in 2015 – and Jagday, was initiated by the PAHF President Alberto ‘Coco’ Budeisky and supported by the Executive Board. Once Haiti had joined the hockey community, PAHF’s aim was to give the Caribbean island a “jump start” and develop the game rapidly.

Jagday’s work has created a sustainable coaching structure on the island. There are five experienced coaches who have attended all the coaching courses and now run programmes across the country, as well as mentoring other aspiring coaches. Jagday leaves coaching resources, including manuals and coaching and playing video clips for the coaches to use between visits.

And the project is yielding results. There has been a sharp increase in the number of people who play hockey in Haiti and the number of clubs has quickly grown from virtually none to 10 in total.

It hasn’t been plain sailing to get hockey in Haiti to this point. Jagday points to a lack of funding from local authorities to support the programmes; a lack of locally-provided administration and programme management; and a poor infrastructure or system for actually playing the game.

This has had a detrimental impact on all elements of the game, from the grass roots development programmes through to the national teams.

Jagday says: “There’s no question there has been an improvement, since my first visit, in Jan 2015, but not to the degree that was anticipated. Looking at the current standard [of players and coaches] they have a long way to go before they can be competitive at international level, such as the Central American and Caribbean Games or the Junior Pan American championships.

“In a way, they have come out of the 2010 earthquake, but not its devastating long-term effects. Their main challenges are political turmoil, job opportunities and poverty. For example, during my last visit in February, the whole country was shut down for a couple of days because of political upheaval.”

But Jagday and PAHF know that by pushing forwards with programmes such as this one they can make a difference to both the standard of hockey and the wider social and health standards in this community. Every visit by Jagday has been enthusiastically received and the retention among the coaches is high. He says there is a “real thirst to learn and excel”.

Reflecting on his time in Haiti, Jagday says: “It is always rewarding to serve the hockey cause, especially in developing countries. Coaches and players are very supportive. The reality and sad part is that it is an uphill battle, despite all the support provided by PAHF, FIH and Olympic Solidarity Programmes. But, no question, there is tremendous talent in Haiti, waiting to emerge onto the international stage.”