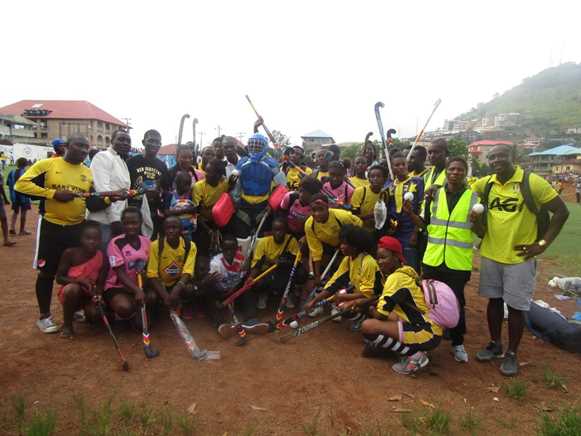 Inspiring people in their community to take up sport and a healthy lifestyle is just one of the aims of the Sierra Leone Hockey Association (SLHA).

The African nation has been through traumatic times recently. Young children have been caught up in vicious wars, Ebola struck and killed huge numbers of the population and last year a mudslide killed more than 800 people.

It is against this backdrop that the SLHA has been running hockey programmes to alleviate just some of the suffering.

Philip Salis Bangura of the SLHA says: “Many Sierra Leoans are traumatised and don't know what directions they should take. We at SLHA believe that hockey is a tool for social inclusion while also promoting peace and development through sport. In order for us to reach the people of Sierra Leone, we have some mechanism that we put in place.”

The forward-thinking organisation has been running a number of community out reach programmes that use hockey as the medium for sending a strong message about discipline, self-respect and self-confidence, as well as all the health and well-being benefits of playing a team sport. It is a solid and steady base from which people can rebuild lives.

The growth of hockey in the African state has been steady and logical. Two years ago, the SLHA embarked on a coach and umpire education programme, with help from neighbouring Ghana and one of the top-ranked European nations, Spain. The coaches have also been helping develop elite players at age group level.

With facilities and equipment in short supply, the SLHA also runs Hockey3 programmes. The three-a-side variation allows children to master the skills of the game and enjoy a competitive experience on a smaller playing surface.

The plan to develop the game in Sierra Leone was initially met with both scepticism and resistance. There was a feeling that hockey was not a popular sport and parents did not see the value of their children learning a sport that was a minority activity.

But, by sheer will-power and the hard work of a number of people, the SLHA is gradually winning hearts and minds and hockey is emerging as a popular sport.

One such person is lead coach Osman Sillah. He has been working with the 8-15 age group girls and boys to develop an understanding and love of the game. “It was initially difficult to get the kids on board. Most of them have a pre-knowledge on how to play football but I have succeeded in showing them how to play hockey and they are now fully committed to hockey, not football.”

One of the recent campaigns run by the SLHA is the Eat and Play Hockey project. This operates in two communities offering young people a meal either before or after hockey training.

As Bangura explains: “Many young people cannot afford a meal a day so they tend to focus on searching for a meal instead of engaging in education or sporting activities. What we do is provide them with a plate of food. Because of this, we have been able to feed about 60 young people, who are living in deplorable conditions.”

The work of the SLHA is a fantastic example of the good that hockey can do across the globe, often providing a vital humanitarian lifeline to the most devastated communities.