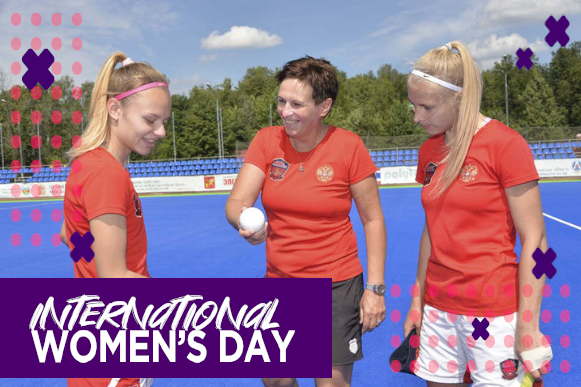 As we continue our week long celebration of  International Women’s Day, we talk to two European coaches who are representative of a growing number of elite level female coaches operating at the very top level of the sport.

Former Russian international Svetlana Ivanova is Head Coach of both the Russian national team and top Russian club side Dinamo-Electrostal, while Svitlana Makaieva is the long-serving Head Coach to both the outdoor and indoor Ukrainian women’s national hockey teams.

For Makaieva, coaching is a life-long passion. She says: “I love sports, I love to work with committed players and staff and see the team make progress and get results. I also love to teach the value that sport can have to young people. In coaching, all these things come together."

When it comes to coaching style, Makaieva is unashamedly ‘old school’ in her style. She says: “Discipline, hard work and team structure are things I certainly bring to the role. I’m also always looking for new things that can benefit our team. But the most important thing I bring is passion for hockey. In Ukraine we talk about “our hockey family”. That refers to everyone in Ukraine and around the world who shares the passion for hockey.”

While Ivanova has only recently become the national team Head Coach, her passion for coaching was first ignited when she was a teenager. “At school I had been playing basketball before I started playing hockey. Once my PE teacher offered us, eight-graders, the chance to supervise the junior basketball players. So I had a few girls from the sixth grade under my patronage. It was my first experience as a coach.

“Later then, when I started playing in the Russian masters national team, I felt that in the future I could convey my experience to younger players. The decision to become a coach I consider as a conscious choice.

“I like my job because I can see the real result of the effort. Because each day is nothing like the previous one. The coach has powerful motivation — to create the team, to set the goal and pursue it with the players.”

When it comes to gender and coaching, the two Head Coaches agree that whether you are a male or female coach, many of the demands are the same. Mental toughness; developing a coaching style that suits the coach and the players; tactical knowledge and technical know-how are all essential elements whatever the coach’s gender.

Both coaches also agree however, that there are some fundamental differences in the social interactions or communication styles when it comes to coaching male and female players.

And Ivanova adds: “The requirements are the same. The woman has to be as strong, mentally, as a man. About differences, I find female team players communicate differently with male coaches. Often they can’t completely open up psychologically. There are questions girls are ashamed to ask, they don’t always trust their own judgements. So there’s some barriers.”

What have been the proudest moments for these two inspirational coaches to date?

“There are few of these moments,” says Ivanova. “At 37 I have finished my playing career in Italy. I’ve started working as a coach and brought the junior team to the highest division of the Europe championship.

“Also the qualification matches [against Australia] for the Olympic Games Tokyo 2020. It was a really interesting process. Yes, we lost to the Australian team in the FIH Olympic Qualifiers, but the game my players showed against those who were ranked second in the world is not something to be ashamed of. Our national team believed that everything was possible. One only has to work hard.

“And of course, at the European Indoor Hockey Champions Cup 2019 in Hamburg, Dinamo-Electrostal won the silver medal – that was a proud moment.”

For Makaieva, the treasure chest of memories is a large one but winning the European Indoor Championships in 2010 remains at the top of the list. She adds that seeing her Ukraine players leading club sides across Europe also makes her feel very proud.

To celebrate International Women’s Day, Ivanova and her squad will be downing their sticks after training and having a fun kick around with a football, followed by a barbecue. It has, she says, become something of a tradition.

Meanwhile, as the Ukrainian Head Coach reflects on the messages behind International Women’s Day, she says it is not so much about gender as what skills you bring to the role. “It’s no longer such a rarity to have a woman as coach to a women’s team. In hockey we say: every person is equally amazing. I think so too. In a team staff you need different skill sets and different personalities to keep the saw sharp.”