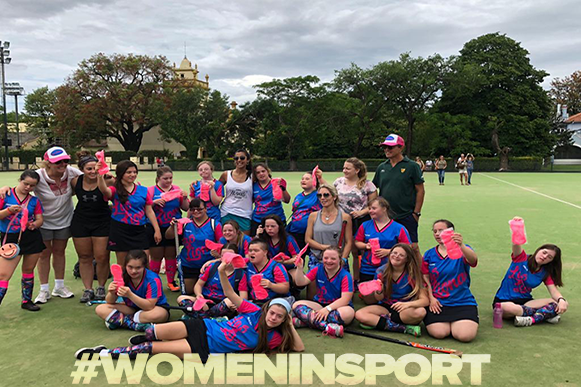 Silvina Forrester is a determined, enthusiastic bundle of energy. She is also the fierce defender of everyone’s right to achieve their ambitions, especially those with different abilities.

For the past two years, Silvina has been spearheading a ParaHockey movement in Buenos Aires, with a view to spreading provision of hockey for all abilities across the whole of the PAHF region. In those two years she has seen her own group – based at the Belgrano Hockey Club – grow exponentially, and she has led members of the group to the biggest of world stages – the 2017 Youth Olympic Games.

Her aim now, although she says it is just a “wild dream”, is to see ParaHockey take its place at the Paralympics.

Silvina’s involvement with ParaHockey emanates from her own personal life story. Her daughter Clara was born with Downs Syndrome.

Before the story goes any further, Silvina firmly adds a caveat: “I disagree wholeheartedly with the term ‘disability’. I would rather say someone has ‘different abilities’, because what these people can achieve in life is incredible.”

And achievement is what this story celebrates.

Clara is now 20 years old and a talented hockey player. Silvina, herself a keen hockey player, first introduced her daughter to hockey when she was six. It quickly became apparent that regular participation in the sport was not only good for the youngster’s fitness and coordination but it also helped her progress socially as well.

"My daughter, the other people in the group, the helpers, the coaches, the mothers, they are all incredible people in their own right."
- Silvina Forrester

“My husband Peter and myself have always believed that the power of sport is far more wide-reaching than just learning skills and performing on the field of play. And we have always wanted to show how important sport is, for all sorts of reasons, for people with different abilities,” says Silvina.

And so in 2017, Silvina decided it was time for her and Peter to start a project that had been playing around in her mind for some time.

“The starting point was Clara’s birthday party. She had invited 12 friends and I asked them if they would like the chance to play hockey. It was raining so we set up an indoor area. I put on some music and we did a warm-up, then I gave them some coaching in basic skills – holding the stick, pushing a ball – then we played our first game.”

"Our main goal is to give the players a chance to find a place where they feel they are part of a team, part of a group of friends."
- Silvina Forrester

Progress since then has been astonishingly rapid. Silvina put forward her ideas for a ParaHockey section at the Belgrano Club and it got the wholehearted support of the club president. Importantly, it also caught the imagination of several of the first team players – including members past and present of the national squad – who flocked to help at training sessions.

The group grew from 12 to 35 within five months. It has just taken a break but when the group returns this month, 41 girls are expected to join. The group is also taking boys for the first time.

There is a touch of bemusement in Silvina’s voice as she says: “I didn’t even realise I was starting ParaHockey in Buenos Aires. It just began as a dream and quickly it has got bigger and bigger.

The ParaHockey club, which trains weekly and plays fixtures against other groups, caters for all ages and all abilities. The youngest player is six, the oldest is 35. Because of the willingness of the volunteers, for the players who are less able, there is often enough people to offer one-to-one coaching. When it comes to playing a game, the players who turn out for the club’s first team are equally willing to play alongside their young charges at ParaHockey sessions. 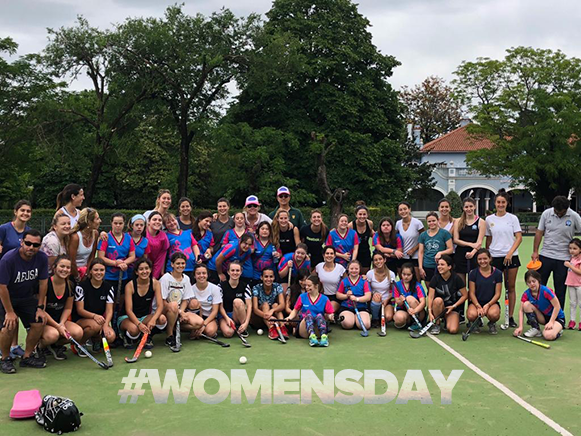 “I actually think they get more than they give from the sessions,” says Silvina, speaking of her army of coaches and helpers.

The defining moment for the Belgrano Hockey Club ParaHockey group came in 2017 when Silvina was invited by the PAHF to take her team to the Buenos Aires Youth Olympic Games to train and play on the same pitch that the international squads would be competing on.

“It was an incredible experience,” says Silvina. “It coincided with the PAHF’s ParaHockey launch. On the back of that I was invited onto television shows, I was interviewed by newspapers and I went on several radio stations.”

For Silvina, this was probably the most rewarding part of the experience. It meant she was able to tell her story to a wider world. She can barely suppress the emotion in her voice as she says: “Our main goal is to give the players a chance to find a place where they feel they are part of a team, part of a group of friends. They learn how to coordinate, how to run, how to play. They learn patience, sharing. They learn so much, it makes me emotional.

“The world needs to find out that these players can do what they want and achieve what they aim for. All they need is love, perseverance, help and support. To show the world what they can do is the most important thing. It’s not about what they can’t do, it’s what they can do that is so incredible.

“I guess I want people to realise that perfection is not just about what is rated important by society – such as intelligence or success in a career – but it actually can be found in other places too. My daughter, the other people in the group, the helpers, the coaches, the mothers, they are all incredible people in their own right.”