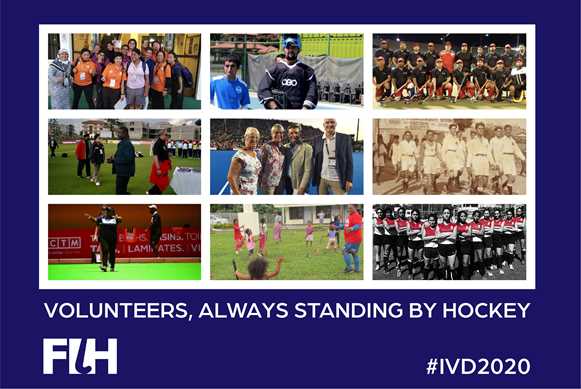 As we celebrate International Volunteer Day, we recognise the huge efforts and commitment shown by the hockey community across the globe. Hockey, as a sport, relies on a vast army of volunteers to ensure the smooth running of events, clubs and associations.

From the chairs of committees and the presidents of associations to the youngest ball patrol boy or girl, you will find volunteers working hard and with total selflessness at every level of the game.

While we are celebrating just a few individuals on the United Nations-led International Volunteer Day, it is worth thinking about and recognising the work of each and every volunteer on every continent.

In Oceania, the work of Fakavahe (Vahe) Paeaimoana has helped school children across the Polynesia kingdom of Tonga to develop a love of hockey. The willing volunteer helps with coaching and umpiring at a number of primary schools, as well as working on a disability programme, an adult hockey programme and on a community hockey project.

The Pan American Hockey Federation is recognising the work of Pedro Berganza and Valeria Pardo, two volunteers working in El Salvador and Bolivia respectively. For Berganza, a decade of work with the national association combined with his position as goalkeeper for the national team has been recently rewarded as the El Salvador Hockey Association has been included in the Sports National Organisation (INDES) budget. This development means more development and growth for the sport

For her part, Pardo has been pushing the cause of hockey both as a development officer and as someone truly immersed in the game. Hockey in Bolivia is hugely under-financed and under-resourced but somehow, Pardo has managed to source funding and manage the meagre budget so that Bolivia now has both a women’s and men’s national team.

The Asia Hockey Federation has nominated two trailblazers of the game. Oman’s Abdul Rehman and Saman Rashid from Pakistan have both taken their love of the game as players into lifelong roles as volunteers.

Since retiring from the game, Rehman has been coach, umpire and team manager for the Oman national team, while Saman has used her knowledge of the game to great effect as a Technical Official at a number of increasingly high profile events.

Also from African Hockey Federation, Louis Tengey is the epitomisation of someone who makes things happen. He started his volunteering journey by creating a hockey club – the Pozo Sticks – in 1977. Two decades on and Tengey realised that, if hockey was to grow in Ghana, a development programme was needed. So he started one.

Another two decades on and Tengey is still heavily involved in the game, working at the National Hockey Stadium and assisting the Greater Accra Hockey Association.

The two volunteers being recognised by the European Hockey Federation are from Bulgaria and England respectively.

Kaloyan Hristov has been instrumental in bringing competitive international hockey to Bulgaria. He founded one of the leading Bulgarian clubs, Slavia 1921, and has also been the driving force behind numerous national and international competitions hosted in Bulgaria.

Hristov is very conscious of Bulgarian hockey and its place in the country’s history which creates a neat link to the other EHF volunteer Katie Dodd.

While Dodd is best known as an international player in the 1980s and 90s, she is now Chair of the Trustees of The Hockey Museum, which is fast becoming a valuable resource both nationally and internationally. Over her distinguished hockey career, Dodd has also been Director of England Hockey and was presented with her member of Honour accolade in 2018 for her work within the game.

The stories of these volunteers are just a few examples of the extraordinary breadth of work that people from all backgrounds and cultures undertake as part of our expansive and hugely appreciated hockey community.