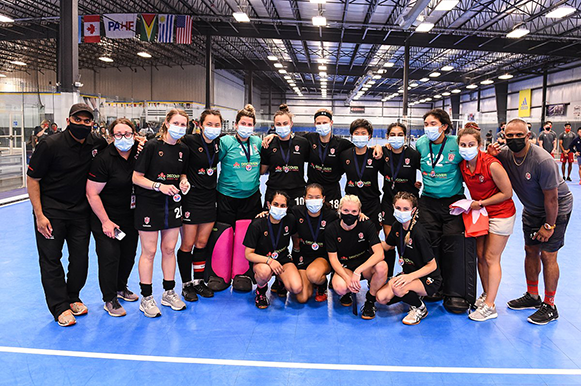 As we build up to the sixth edition of the FIH Hockey Indoor World Cup, which is set to take place in Belgium early next year, we throw some light on the teams that will compete for the title at the intense, action-packed competition that will be played at Country Hall de Liège from 2-6 February 2022.

The latest of our profile series focusses on Canada’s women, with Alison Lee – the captain of the indoor national team who is also a senior international outdoors – giving us the low-down on all the build-up to the showpiece event in Liege.

On the excitement levels about going to Liege to take on the world’s best.

“We are over the moon. When we heard that we would be going, all of us were like, ‘are we dreaming? Somebody pinch me’! Even through the spring preparing for the (Indoor) Pan Am Cup, it was like ‘we are going’, ‘we are not going’, ‘we are going’, ‘it’s been moved’. So, just getting through all that, to now be going to the Indoor World Cup, is huge for us and we couldn’t be more excited.”

On booking that ticket to Liege with a 2nd place finish at the Indoor Pan Am Cup in Spring City, Pennsylvania (USA).
“I think with the training that we were able to do leading up, we were happy with how we did. We had a lot of restrictions in Canada due to covid, so we were only together training for a couple of weeks before the tournament. Leading into March 2020, we had been training and had a good cycle going in. We’d been to Belarus to play before their Europeans, so we had seen some of those teams and played against some of them. In March 2020, we were excited, but then everything got pushed back again, which was a bit of a kick in the butt. Going into that tournament, we would have liked to prepare more, but we did the best we could, given the circumstances, so we were quite happy with how we did there. We would have liked to have come out with the win but based on how we were able to prepare and with the people available, we did quite well.”

On her team’s incredible 2-1 victory over Argentina in their final match of the round-robin phase, in which Lee scored both goals to put her team into the title match.
“It is only the last quarter that that stands out [in my mind], but we went up [late] and they scored a goal to tie. The thought in my head was ‘it will be okay to tie’ because we were so exhausted. But one of my team-mates said, ‘we’ve got to go [to try to win this]’. We pushed through the last few minutes to get that go-ahead goal. They had a corner at the end, and we were like ‘oh no!’ But we are so sound with our corner defence and our keeper so solid at the back, we thought, ‘it’s okay, we’ve got this’. All we had to do was play it out, and we did. There was a little bit of controversy as they weren’t sure if it hit a back stick or something, so there was an early celebration [from us], then a pause, then back to it! So that was really our final, there. Getting to the competition final, that was huge for us. That was the one win that we really needed in the tournament. I remember talking to our team-mates afterwards, saying it was such a competitive game and that this is why we play hockey. Right down to the final minute it was competitive. We had so much fun playing that game.”

On the post-match celebrations.
“There was a lot of hugging! We haven’t been able to hug, shake hands or anything in Canada. We haven’t hugged in so long, so let’s keep the celebration going!”

On the influence of coach Shankar Premakanthan, who played in goal for Canada’s men at four Indoor World Cup competitions between 2003 and 2015.
“It’s great to have him on our side. Our keepers definitely benefit, because we have some of the best indoor keepers in North America, if not the world. His experience, having played at and qualified for these tournaments, is huge. He eats, sleeps, and breathes hockey, so just having that belief behind us is important and it really helps us. You really see on the indoor side that it is such a small group, and everyone is in it for each other. You see if from the coaching staff right through all the players, whether you make the team or not. Everyone is supporting everyone and wanting the team to reach their goals. We feed off him, and it makes the whole team environment really great.”

On what it means to return to the Indoor World Cup stage seven years after debuting at the Leipzig 2015 competition.
“It is hard to put into words what those [Indoor World Cup] experiences are like, because in field hockey that is our pinnacle. Coming from Canada, we don’t get these international opportunities very often, especially on the indoor international stage. We couldn’t be more excited. It has been seven years and we are raring to get back out there on the international stage against all of the world’s top teams.”