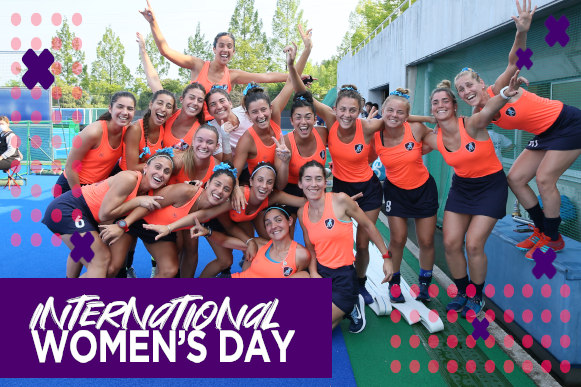 “A world where everyone has the opportunity to participate in hockey. I know that for nations, that means different things. For some nations it is about facilities, for others it is about education.

“There are some countries in our hockey family who cannot even afford to travel for competitions. My dream is for the FIH to be so strong that everyone has the same opportunities. I would love to be able to look back in 20 years time and say that the FIH has managed to open up hockey to every nation.”

Danae Andrada is President of the Uruguay Hockey Federation, one of the nations that has been steadily making its way up the world rankings (the women are currently ranked 25th in the world, the men 56th).

She is also Director of the Uruguayan Sports Confederation and sits on the executive board of the FIH, a position she has held since 2017. Despite sitting on various boards and committees where it is traditionally all about reserve, pragmatism and hard-headed business acumen, Danae is unapologetically passionate when it comes to her beloved sport.

“I have a picture of myself when I was eight years old and dreaming about playing hockey. If you had told me that I would have played for my country and then become President of my country’s national hockey federation, been involved in Olympic sport and also sitting on the board of the FIH, then I would have not believed it.”

Danae is an international hockey athlete herself, having been invited onto the national programme in Uruguay at the age of 13. She progressed through the age group categories into the senior team. On her retirement from competition, Danae threw herself wholeheartedly into the administration and development side of the game.

As the head of the sport in Uruguay now, Danae is a strong advocate for junior hockey – Uruguay women’s sixth place finish at the 2014 Youth Olympics is a source of immense pride to her and it is, she says, a sign that Uruguay hockey is only going to get better and better.

“This is where it starts,” she says. “Build your strong foundations and the rest will follow. Invest time into providing a quality experience for young players and they will stick with the sport and you will have a wider talent pool to draw from.”

Danae is also an ardent fan of team work in all its guises.

“One of the most beautiful things about our game is the team work it involves. I am not just talking about the players in the squad, it is about the coaches, the manager, the officials. It is about all the things that come together to make the sport happen. Yes, it even means the federations and the other institutions involved in the process.