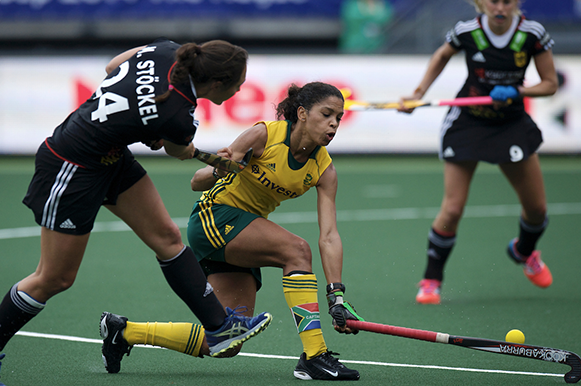 ‘Being an Olympian is something I am forever grateful for’, says South Africa icon Marsha Cox

Marsha Cox is an undisputed legend of South African hockey. Making her senior international debut in 2001 at the tender age of 18, Cox – or Marsha Marescia, as she was known before her marriage to renowned Dutch hockey coach Alexander Cox – went on to represent her country a staggering 347 times over a 14-year career, competing at the Athens 2004, Beijing 2008 and London 2012 Olympic Games, captaining her country both in Beijing and London.

As well as the Olympics, she also played in four World Cups, four Commonwealth Games competitions and is a multiple African continental champion. It was a remarkable journey for Cox, who grew up in Durban and experienced apartheid in her early years before going on to become a trailblazing and iconic figure in South African hockey, not to mention a truly world class player.

In the first of two interviews, Cox – who lives in the Netherlands with Alexander and their daughter, with baby number two set to arrive in September – reflects on her Olympic memories as a player, whilst also recalling the day she was left completely star-struck by meeting track icon Usain Bolt in the Olympic Village at Beijing 2008.

Hi Marsha, thank you for talking to us! Looking back on your international career, what moment would you say that you are most proud of, and why?
Marsha Cox: “I would probably say that one of my proudest moments would be my first Olympic Games. I think that would always be something special. You know, growing up in apartheid South Africa, and being part of pretty much the first generation of change as a teenager, being exposed to the Olympic Games at a time when for the first time we were possibly even allowed to dream of it, it was a seed that was planted. In 2004, when I was part of the Athens Olympic team for South Africa, that was huge honour and a huge achievement, and something that I had dreamt about, but never, as a teenager, thought that could ever become a reality. So, when it did, it definitely marked one of the most special moments in my playing career.”

What is your best memory from competing at the Olympics, either on or off the field?
Marsha Cox: “It’s a bit tough! I think the first on-field amazing memory would be at the 2004 Games in Athens, which was my first Olympic Games. We were having a really rough start to the tournament, and in the pool stages we came up against Germany, and we ended up winning that game 3-1. As the tournament continued, it only got tougher of course, but Germany went onto win the Olympic gold medal. Actually, we were the only team to take points off Germany at the Olympics in Athens, so that one will definitely stick in the memory bank.

“Off the field, there have been so many great memories. I think one I’ll always treasure was at the Beijing [2008] Olympic Games, the moment that I met Usain Bolt just outside the Jamaica House in the Olympic Village. It was after he had broken the 200m world record. I remember being so star-struck, not knowing what to do! I didn’t have my telephone with me, I didn’t have anything. I just had my SA gear that I would need to travel back home to South Africa [wearing]. I asked him for his autograph, and as I had nothing, he signed his autograph on the leg of my tracksuit pants. So, I travelled back to South Africa in the tracksuit pants that had Usain Bolt’s signature on them. That is definitely one [moment] that I will remember as well.”

This month would have been the start of the Tokyo 2020 Olympic Games, which has now been delayed by one year due to the COVID-19 global health pandemic. As a triple Olympian who captained the team at both Beijing 2008 and London 2012, what did it mean to both you and your family to represent South Africa on the biggest sporting stage in the world?
Marsha Cox: “I can totally understand the disappointment, for some athletes, that it has been extended by a year. But, for others, it is a great opportunity, to have an extra year of training and preparation. Being a triple Olympian is something that is special, and something that I am extremely proud of. For my family of course, growing up in a completely different time, this is something I think will always be dear to my family, the fact that I participated in three Olympic Games. It’s an amazing event, and I think participating and being one of those very unique athletes thereafter makes it something even more special. You truly understand how unique it is, to be an Olympian. I can only imagine the excitement and anxiety as we build up to Tokyo 2021, for some of the players. But for myself alone, being an Olympian is something that I am forever grateful for.”

South Africa’s teams, both women and men, will both be involved in Tokyo next year, something you must be delighted about. Do you have any words of advice for those younger members of the teams who will be attending their first Olympic Games?
Marsha Cox: “It’s fantastic that South Africa will compete in Tokyo 2021, both the men and women’s hockey teams. For all the youngsters going to their first Olympic Games, I think the only advice I can give you is to cherish every single minute of it. It is going to be over before you know it, but one thing to bear in mind is that everyone is there to compete, and everyone is there with the winning mind-set. So, go out there with that exact same mentality, that exact same conviction, and do your best. But most of all, enjoy every single moment of every single experience that you are exposed to at the Olympic Games.”

The second part of our extensive interview with Marsha Cox will be published in the coming weeks.