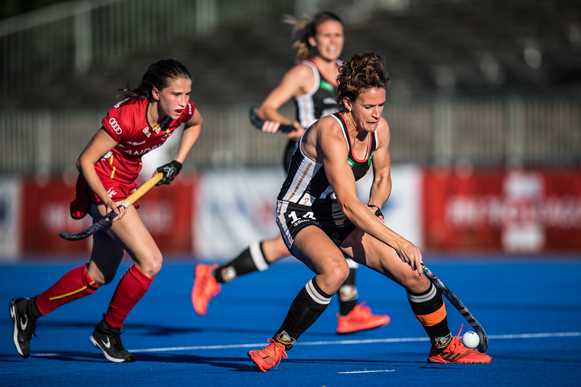 There is just under one month to go before the FIH Hockey Pro League makes a welcome return on 22 & 23 September. Reigniting the global league will be the men’s and women’s teams of Germany and Belgium as they take to the pitch in the first of a series of European focused matches.

It has been a long seven months without international hockey competition and players and coaching staff are relieved to be getting back to the action, albeit under very different circumstances to pre-Covid times.

Among the measures being taken to ensure the safety of everyone involved in the matches, the games will be played behind closed doors and in adherence to the safety guidelines of the competing governing bodies. Hygiene and personal safety equipment will be used in accordance to national association guidelines.

Despite a very different atmosphere around the stadium, with no spectators and strict hygiene protocols, everyone involved is buzzing with anticipation.

Belgium men's Head Coach Shane McLeod says that what his players might be lacking in match play they will more than make up for in enthusiasm. “It has been a long time since we have played an international match,” he says. “Our players have done a great job physically and we will take the opportunity to test where we are at after such a long period. Our structures may need to be put together again [after such  long break] but the skill levels should still be at a  high standard."

And the German women's captain Janne Müller-Wieland says: "It will be great to get back to international hockey. It will be a bit weird with all the safety guidelines and no spectators, but if that is what it takes to be allowed to play again, that is fine by us. It will be great for the hockey world to start the Hockey Pro League again."

Ireland's Alison Keogh will be one of the team of umpires officiating at the opening weekend of the FIH Hockey Pro league action. She says: “I’m looking forward to getting back out on the pitch. It’s been really strange not being at hockey or even being able to watch any games for so long. I think this was my first summer without hockey in over 10 years.”

Like the players, the umpires have been keeping fit and primed for a return to hockey through home workouts. As Keogh explains, it has been important for both physical and mental well-being to stay as active as possible throughout the months of lock-down.

“I made sure I kept on top of things training wise during the break, so I’m lucky that I could keep that going. It was so important mentally to keep active, never mind from a fitness perspective. My trainer at Fitness Health Performance was great at keeping me going with some home workouts during lockdown and since the gym opened I’ve been back training as normal. I’m feeling good.

Nick Pink is CEO of England Hockey and Great Britain. Great Britain will be returning to action in October with matches against the Netherlands and Belgium, before hosting Germany at home.

"At GB Hockey we are looking forward to the return to competitive international hockey, and an opportunity not only for our players, coaches and support staff but those  GB Hockey fans looking forward to an exciting year ahead leading up to the Olympic Games. Covid-19 has taken so much away from us in the last few months, not least the opportunity to host the GB Hockey home games in May and June, and we are hopeful for the restart, and excited about the international game returning with the FIH Hockey Pro League."

“We have been ramping things up,” says Great Britain’s Emily Defroand. “It has been so good to get back into training. There is a real buzz and energy around the team after this long break. We have had a lot of conversations with the coaches, the Performance Director, and we are very optimistic about the restart. We will be ready and firing on all cylinders by the end of October.

“This break has been good for us. Another year of honing our style of play, a year to develop as a team and it has also meant players carrying an injury has allowed them to re-set the battery.”

It is not just the players and coaches who are looking forward to a return to hockey action. In Hawaii, Argentinian super fans Melisa Lin and Eric Dubois are equally excited about the FIH Hockey Pro League being back on the screen: "We are following all the teams on Instagram and saw how they have started training and preparing themselves," says Melisa.

"We, as big field hockey fans, are super thankful to the FIH for giving us the opportunity to keep watching field hockey and to keep spreading the sport globally. Last year we were able to subscribe on "Bleacher Report" and watch all the games through that platform. We are Argentinian fans so we want them to win of course.”

One Argentinian who shares Melisa and Eric’s hopes for a good showing from Las Leonas is super striker Delfina Merino: “We are all looking forward to start again with the FIH Pro League,” she says. “The team has really missed international matches. Our last game was in Argentina against the Netherlands and it was really exciting and tense, so we are glad that time is coming again.”

For India’s Harmanpreet Singh, there is both excitement and a sense of caution. “Our team is always ready to hit the ground but, as you know, we have a few months till our Pro League matches, so we are keeping in mind the Covid situation and are working out in the best possible way to reach our top level fitness by the time the Pro League matches start.

With their FIH Hockey Pro League campaign also starting again in April, Australia’s Tyler Lovell says his team are taking a slightly different approach to many of the other competing nations: “With such a long build up to our next Pro League game, we have the opportunity to review and analyse areas of our game that we need to improve on and adjust.

“Our build up to the next Pro League game will be very different to a lot of the other nations. We’ll have a daily training environment starting up in January 2021 and a lot of high intensity and competitive inter squad games which we’re confident will have us ready to go come April.”

As the FIH Pro League prepares to spring back with its exciting brand of global hockey, FIH chief executive officer Thierry Weil is also delighted to see the sport ready to resume its season, albeit with strict and necessary measures in place.

"The FIH Hockey Pro League has been created to boost the promotion of hockey," says Weil. "It brings ‘hockey at its best’ to fans, who can enjoy thrilling matches from the stadium or watch them on TV or digital streaming. Therefore, after such a long break due to the COVID-19 pandemic, it is essential and delightful that this competition, which hockey fans and players have been missing so much, comes back, with of course all necessary measures to protect everybody’s health.”