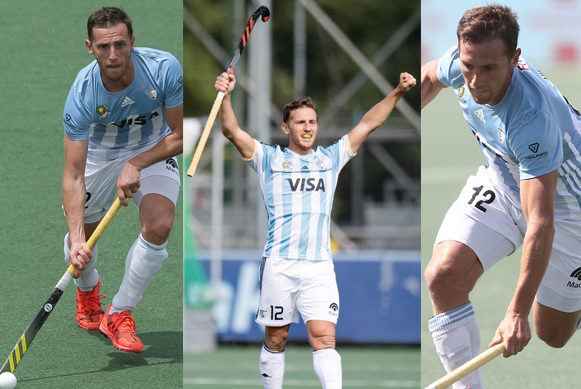 With Tuesday 23rd June being Olympic Day, it seemed the perfect opportunity to profile an athlete that played a starring role as Argentina’s men claimed their first ever Olympic gold medal at Rio 2016.

Fifteen years ago, Lucas Vila became the most talked about young player in world hockey thanks to a series of devastating attacking displays at the 2005 Junior Hockey World Cup in Rotterdam, the Netherlands. The brilliant 18-year-old attacker from Banco Provincia Hockey Club in Buenos Aires was, quite simply, too hot to handle throughout the event, being named as the tournament’s best player thanks to six goals and numerous assists as Argentina stormed to the title.

Eleven years later, no fewer than eight members of the ‘Class of 2005’ would again stun the world, this time on the biggest stage of all – the Olympic Games Rio 2016. Playing alongside fellow Junior World Cup winners Pedro Ibarra, Matias Rey, Facundo Callioni, Juan Saladino, Lucas Rossi, Manuel Brunet and Juan Lopez, Lucas Vila was the creative heartbeat of the Los Leones team that, against all the odds, snatched Argentina’s first ever Olympic hockey gold medal. Whilst Argentina’s senior men’s team had won various continental titles over the pervious decade, as well as a surprise bronze medal at the Hockey World Cup in 2014, the Olympic success saw the huge promise displayed all those years ago in Rotterdam emphatically realised.

However, with Vila, Ibarra, Rey, Callioni, Rossi and Lopez still very much part of the Argentina set-up and determined to defend their Olympic crown at the delayed Tokyo 2020 next year, their journey is far from being over. In an interview with FIH.CH to mark Olympic Day, Lucas Vila looks back on his sparkling career and explains just what it means to him to be an Olympian.

Hi Lucas, thanks for talking to us. You have enjoyed a brilliant career, from winning the Junior World Cup in 2005 to becoming an Olympic gold medallist at Rio 2016 being two of many glorious highlights. How do you reflect on these incredible moments, and what is your biggest ambition in the years ahead?
Lucas Vila: “From the Junior World Cup in 2005, I think that a great team was starting at that time, and a lot of players were involved in the same team that, many years later, achieved the gold medal at Rio 2016. I think it was a really nice journey, [great] that I could be part of it, and I enjoyed it. We had a lot of ups and downs during that period, so I think that was something nice to enjoy. We struggled at certain points, but with a lot of training and effort, we achieved the most wonderful thing, the gold medal in Rio. I really enjoyed it [the whole journey], and I would do it again. For the years that are coming, I hope that this team can be together in Tokyo, 2021 now. I hope that we prepare in the best way to get something more there, to go there and defend the medal that we won, and to show ourselves that we can [do] something there.”

Who or what first influenced you to pick up a stick and play hockey?
Lucas Vila: “I think the first influence I had in my life to play hockey was my dad. He used to be a hockey player, then he [became] a hockey coach. I think he always encourage me and my brothers [former Argentina internationals Matias and Rodrigo] to try and play hockey, and if we liked it, we could choose to play it as our main sport. Also, my club Banco Provincia [in Buenos Aires]. It was the first environment where I could develop myself and train with the other kids. It was always a really nice environment there.”

Who has been the biggest influence on your career and why?
Lucas Vila: “It would be my two brothers, who were older than me and playing hockey already. When I was a kid, I was always watching how they play, the things they do. I was like every younger brother, trying to imitate my older brothers!”

How would you best describe your playing style or attitude on the pitch?
Lucas Vila: “My playing style is always [about] trying to do new things. I always pay attention and look carefully at what my defenders might do, so I try to come up with new things, new techniques that might work in every game. I’m always in the offensive part of the game, so I try to use all my skills, everything that I practise during the weeks and months before the tournaments. I try to use it at the right moment, and especially inside the circle.”

What moment on the pitch are you most proud of and why?
Lucas Vila: “I always feel proud of myself, as a striker, when I score a goal, or when you win some [penalty] corners or get some offensive result during the game. This is because it will help your team and, in that part [of the field], that is your main objective. But also, I think as a striker, it is really helpful when you defend in the same way as the defenders do. You are also helping the team by defending and recovering the ball.”

What would be the best advice you could give to aspiring young hockey players?
Lucas Vila: “I would say to the young players that at the beginning you have to enjoy the game, you have to enjoy playing with your team-mates, with your friends. It is a really nice sport, hockey. You can create many things [memories]. First, enjoy it, but when the competition starts, you have to try really hard to get some results. If you represent your country at the end, you will be very proud.”

Tuesday 23 June is Olympic Day. As an athlete who has competed at two Olympic Games and is the proud owner of an Olympic gold medal, what does being an Olympian mean to you?
Lucas Vila: “I think that being an Olympic athlete is something unique. It is a feeling that you will always remember. I still remember my first game at London 2012, and I was kind of nervous and also kind of happy – you want to enjoy and to remember everything. In Rio I was a bit more relaxed, and we won the medal. It was a great few weeks in which we could enjoy our best hockey, and I think we played our best hockey. To do it during an Olympic Games, where the whole world is watching the sport at that time, it was really nice. It was the best memory that I could have inside a hockey pitch.”