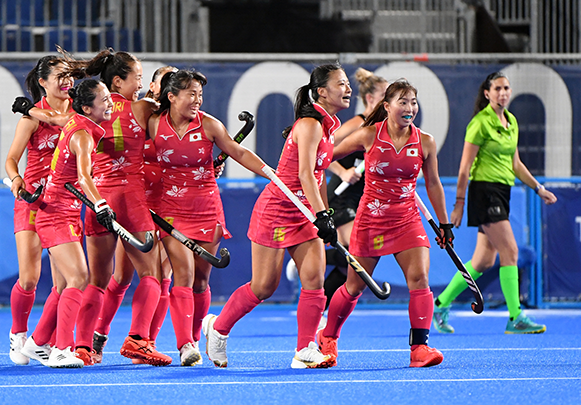 A challenging start is bearing fruit for the Cherry Blossoms

Xavier Arnau knows all about the stresses of preparing a team for the Olympics. He is a silver medallist from the 1996 Olympics Games and also represented Spain at the 1992 and 2000 Olympic Games.

But nothing would have prepared the vivacious Spaniard for the challenge ahead of leading the Japanese women’s national team to a home Olympics.

“i took over the team in January and I planned to go to Japan then, but the country was closed to foreign people so I had to do my first training sessions via Zoom.”

Those early days saw Arnau running training sessions for 44 players in training camps over Zoom.  He then cut the squad to 25, which made things a little easier to manage. On arrival in Japan, he again worked with 44 athletes until a second, final cut.

“It was made doubly difficult because once I arrived in Japan, I couldn’t find teams with which to have test matches. We tried to go to Europe but that was not possible. Then some teams like Spain and Ireland wanted to come to Japan, to test the pitch, but that not possible either. So we never really knew the level of the team because we didn’t play anyone else.”

Japan were finally able to play some international competition when the Argentina and the Netherlands teams arrived early before the Olympic Games Tokyo 2020 started.

When Arnau did arrive in Japan, he found a squad of players who were keen to train for hours every day. All the national team players work for one of four large companies, and are released every afternoon to do hockey training.

For Arnau, the desire to work hard needed to be balanced with a shorter, higher quality practice. “Technically they are really good players because they train every day. But, for example, I wanted to take them for three days of team-bonding, with no hockey. It worried the players that those three days would be bad for their hockey.

“But, they always spent a lot of time – three or four hours – on the pitch but they were not tired at the end of it because it was largely about repetition. We changed that quite a lot so they were doing an hour and a half of high quality, more challenging work.”

“When you see Asian teams, they play attack, attack, attack. I wanted the team to think more about possession of the ball and how to change the direction of play. they are doing that and I think they are getting better and better.”

For the future of hockey in Japan, Arnau believes that the pitches at the Oi Hockey Stadium and a new recognition and enjoyment of the game among the Tokyo residents will be good for the development of the game.

The next challenges facing Arnau and his team are the triple challenges posed by the Asia Cup in February, the FIH Women’s Hockey World Cup in July and August and the Asian Games at the end of the year. While he is still in discussion with the Japanese Hockey Association now, Arnau's desire to continue to develop the work he has started is evident in his praise for the Cherry Blossom's work ethic and eagerness to learn.