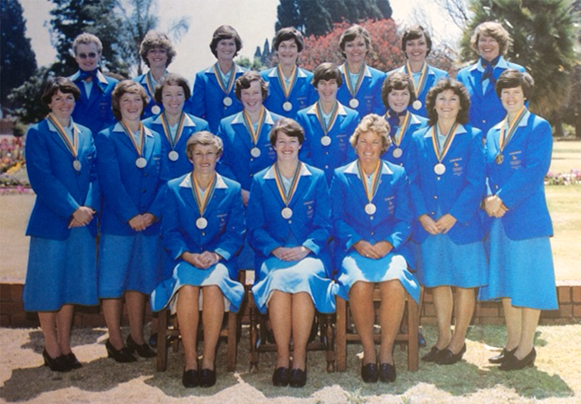 When people are asked to recall past winners of the women’s Olympic hockey competitions, there are some nations that just roll off the tongue. Netherlands, Australia, Germany are usually the first teams that spring to mind.

In 1980 however it was a very different team that took to the podium. A moment of hockey history was made when Zimbabwe stepped forward to collect their goal medal after a sweet 4-1 victory over Austria.

The whole story is one of surprises, twists and turns. As a nation Zimbabwe had only existed for a few months after it had been declared an independent nation earlier that year. Prior to 1980, the country had been known as Rhodesia and had been under British colonial rule.

The recognition of Zimbabwe as an independent state meant the National Olympic Committee could ask for recognition by the IOC. This was granted and a very late invite to the Olympic Games in Moscow meant that the Zimbabweans could field a women’s hockey team in the competition.

Six teams lined up for the women’s hockey competition. These were: Austria, Czechoslovakia, India, Poland, the Soviet Union and Zimbabwe. The African team had only learnt they were able to participate three weeks ahead of the opening ceremony.

In preparation, the team played against local men’s teams. On arrival in Moscow, the athletes realised they didn’t have the correct shoes for the surface as they had never played on an artificial turf before. This called for a mad dash to buy new shoes.

The new surface and lack of preparation didn’t seem to hinder the Zimbabwe team. They beat Poland 4-0 in the opening match before grinding out a 2-2 draw with Czechoslovakia. Another 4-0 victory against the home side was followed by a tough match against India. This resulted in a 1-1 draw and so the team entered the final game against Austria.

Zimbabwe took the lead through Sandy Chick but a penalty stroke meant Austria were able to level the score just before half-time. Patricia McKillop, who was the tournament’s top scorer, gave her side the lead again in the 51st minute before both she and Gillian Cowley put the game out of the Austrian’s reach.

Ann Grant was captain of the team and she had the pleasure of leading her team onto the podium. She says the event, and the following weeks, make up a time that still have a wonderful and surreal quality.

“It is quite surreal to think that 40 years have past since my wonderful team’s fairytale story was written into the history books,” she recalls. “We received a huge reception on our return at the airport with drum majorettes, floral bouquets and a large crowd of family and supporters who all showed their jubilation at our victory.  Government officials attended various celebratory functions and we were welcomed all across the country.”

Grant says the newly-formed Zimbabwe National Olympic Committee had to pull out all the stops to ensure things such as foreign currency, team uniforms and new passports were all in place.

The players themselves were training before and after work and at weekends. Grant herself used wooden pegs in the back garden to practice dribbling around, while her husband Clive proved a useful training partner.

Once in Moscow, the coach Anthea Stewart made sure the players were well briefed ahead of each game and even managed to organise a practice match against India – something Grant says gave the team an enormous amount of insight.

When she looks back at the final match, Grant says: “The whole game was a blur for me personally, as I was focused on keeping the team playing right to the end whistle.

“When final time was indicated, words are insufficient to describe that feeling. Your heart wants to explode out of your chest with the feelings of great joy and happiness. We had secured the gold medal, firstly for our team but also for our newborn country of Zimbabwe.  We were supremely proud ladies. The fact that we did not have a national anthem at the medal presentation was not a deterrent for our beaming smiles and waves to the crowds.

“Personally, the medal presentation was very emotional for me as I had none of my family or husband there to witness this auspicious occasion. I was even thinking of my late Dad who had passed away only eight months prior to the Olympics. The small crowd of Zimbabwe supporters in the stadium sang and raised our spirits as we walked around the field then there was huge celebrations with our Organising Committee.

“I think we initially gave hope to all Zimbabweans from all walks of life that even as a new country, facing the best in the world, we succeeded against all odds. Not one of the team had ever played on an artificial surface, never used the multi stud boots that were hastily acquired in Moscow. We then had to adapt to a different style of play compared to the hard baked grass turfs back home.  We were simply excited at this new adventure and played our hearts out.  For many reasons, hockey is struggling in Zimbabwe - our team did put that country on the global map 40 years ago.”

The gold medal winning team continue to meet and communicate and in 2018 they had a reunion at the home of the late vice captain Liz Chase. You sense the emotion in Grant’s voice as she adds: “ For me, it is not just the winning of the first ever women’s hockey Olympic gold medal but all the pieces of that tapestry that are needed to make the whole picture complete – they were life experiences that remain with me forever.”

Olympic hockey through the ages

• Seoul 1988: As in 1984, Australia men were favourites, but fell to Great Britain in the semi-final. GB then stunned Germany 3-1 in the final, as two goals from Imran Sherwani sealed gold. In the women’s tournament, hosts Korea’s journey to the final sparked intense media interest, but they fell at the final hurdle as Australia grabbed their first Olympic hockey gold medal, triumphing 2-0 with goals from captain Debbie Bowman and Lee Capes (mother of current Australia star Caitlin Nobbs).

On this day – 31 July: As well as being the opening day of the hockey competition of the London 1948 Olympic Games (won by India men) and the women’s tournament at Los Angeles 1984 (won by the Netherlands), it was also the final day of the first ever Olympic women’s hockey event, which took place at Moscow 1980. The title went to Zimbabwe, who carved their name in hockey’s history books by defeating Austria 4-1 in their final match of the round-robin competition.