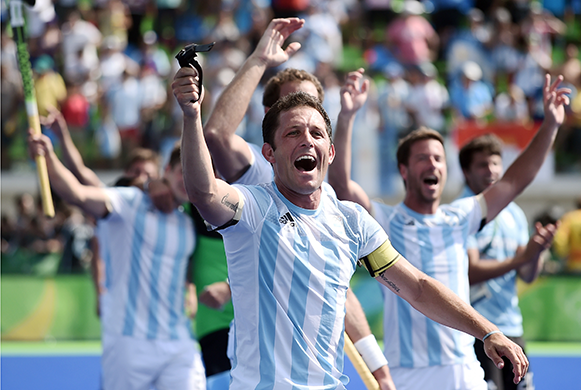 In the final of our feature stories marking the original event dates of Tokyo 2020 – today (7 August) would have been the concluding day of the Olympic Hockey competition – we speak to Argentina captain Pedro Ibarra about his team’s incredible gold medal at Rio 2016.

As well as reflecting on his team’s remarkable achievement four years ago in Brazil, Ibarra – who has made 303 appearances for Los Leones since making his senior international debut way back in 2006 – also discusses his love of the Olympic Opening Ceremony, his admiration for Argentina basketball legend Manu Ginóbili as well as giving his thoughts on a potential title defence at next year’s Olympiad in Tokyo, Japan.

Hi Pedro, thanks for talking to us! It has been four years since Los Leones shocked the world by winning the Olympic title. As the team captain, to win the event must have been a simply incredible, especially in South America. How do you feel about it now, looking back on that wonderful time?
Pedro Ibarra: “The way I feel today, looking back to that time in Rio 2016, is proud. I’m proud to have been part of that amazing team that won the Olympic Games.”

What were your favourite moments in Rio, and which result on the way to the gold medal made you think “we really can win this”?
Pedro Ibarra: “I don’t have a favourite moment in Rio, because all of the days were special for me, and I have a lot of memories of that [time]. The moment that I felt that we could win the medal was when we won against Spain in the quarter-finals. That was the first time we had reached an Olympic semi-final.”

We recently spoke with your long-time team-mate Lucas Vila, who talked about the eight players that won the 2005 Junior World Cup who went on to Olympic gold at Rio 2016, one of which was you. Can you tell us what that journey means to you, to do it with so many friends over so many years?
Pedro Ibarra: “As you say, there were eight players who won in Rio that also won the [Junior] World Cup in Rotterdam 2005. It is nice that when you look back you can see that we travelled all our international career together, and we shared a lot of moments. Nice moments, but others not so good. But the main things is that we did it together, and that is nice.”

Not including your own incredible gold medal success, what is your favourite Olympic moment?
Pedro Ibarra: “I think that the best moment in the Olympics, apart from hockey, is the Opening Ceremony. It is a great moment that you can share with all Argentinean people, and I really enjoy it.”

Finally, you and your Argentina team-mates will be aiming to defend your Olympic title this time next year at the delayed Tokyo 2020 Games. What are your thoughts about this challenge, and what would it mean to you, as team captain, if you managed to do it?
Pedro Ibarra: “We know that we are the last champions, but this tournament is something different. It [is now] four years later, and every team has changed players, changed coaches, changed tactics, changed everything. So, we have to be quiet and go step-by-step, as we did in Rio.”