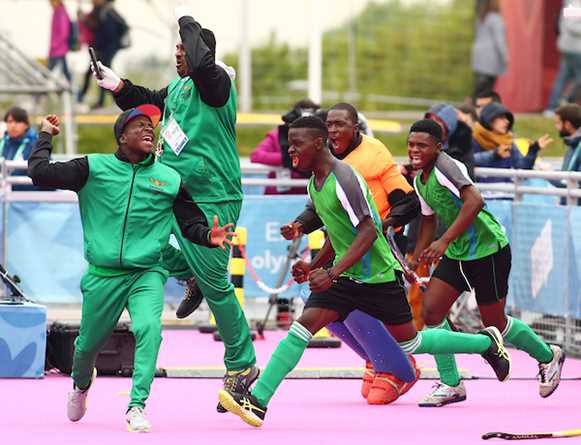 The Semi-Finals of the men's and women's hockey events at the Buenos Aires 2018 Youth Olympic Games were confirmed today following the conclusion of the Quarter-Finals.

Malaysia were first to qualify as they defeated Austria 2-0 thanks to two goals from Akhimullah Anuar. Speaking afterwards, Malaysia's captain Amirul Azahar said: “Today we played a very good game and I am proud of my teammates because for our first Olympic experience we qualified for the Quarter-Finals and now we've made the Semi-Finals! I hope our team will play even better for the next game and we can make history!”

Zambia then shocked thousands of onlooking spectators after they knocked reigning champions Australia out of the competition. The African nation won 6-4 thanks to a hat-trick from Phillimon Bwali. Zambia never went behind in this match and have now guaranteed a chance to play for medals. Afterwards, Zambia's two goal hero said: “I feel really good, this is our first time at the Youth Olympic Games and we made it to the Semi-Finals so I feel amazing! We are already getting prepared for the next match against Malaysia. We will do it!”

India have been playing some impressive hockey during this event and did not disappoint as they defeated Poland 4-2. Speaking afterwards, India's Maninder Singh said:“Today we played a great team in Poland but we worked hard to reach the Semi-finals! I must say thank you to all the fans in the stands and followers around the world for their great support!”

Argentina meanwhile continued their 100% record as they defeated Bangladesh 5-0 in the last men's Quarter-Final of the day. Captain Facundo Zarate was the inspiration behind his team's victory, picking up three goals to the delight of thousands of home fans packing out the stands.

Santiago Micaz spoke for the Argentina team when he said: "Reaching the semi-finals in front of our crowd is amazing. It means everything to me and the team. We are so happy right now – with the volunteers, the supported, our coach. They are all pushing us forwards. With that support we can do anything."

The results mean the Semi-Final line up sees Malaysia take on Zambia, while Argentina will face India.

In the women's competition, India, South Africa, reigning champions China and Argentina are still in the medal hunt as they all qualified for the Semi-Finals.

Speaking after her team's 3-0 victory over Poland, India's Mumtaz Khan said: "I am so happy right now. I am proud of my team and myself. Now we need to make sure we qualify for the Final and take the gold medal back to India.

Australia and South Africa played out a hard fought, exciting match, which ended 3-3 in regulation time. South Africa won the subsequent shoot-out to the delight of Ammaarah Hendricks, who said: "It is unbelievable, I am very proud of the girls, I cannot believe we have got this far. It is very exciting and a real dream come true. The shoot-out was stressful but our goalkeeper [Mishka Ellis] stood firm and saw us through. All the girls played so well."

If the preceding game was edgy, the match between Austria and the 2014 champions China was tense and cagey. The match was a 1-1 draw at full-time and the shoot-out then went to sudden death after the teams remained in deadlock after three attempts each. It was China's captain Ma Ning, who held her nerve to score the deciding shoot-out goal in sudden death to secure a place in the Semi-Finals.

China's Zhu Xinyi said: "The team is really happy, but wow, the pressure was really high. I do not think we played our best game. We will need to improve for the Semi-Final. From now on we have nothing to lose and we will enjoy every moment of the competition."

The results mean that in the Semi-Finals, China will face Asian rivals India, while Argentina face South Africa.

You can now see the full Semi-Final schedule for tomorrow here.

In the men's 11-12 classification match, Kenya defeated Vanuatu 9-2 while the match between Pan American rivals Mexico and Canada to decide the 9-10 spots ended with a 2-1 win for Mexico.