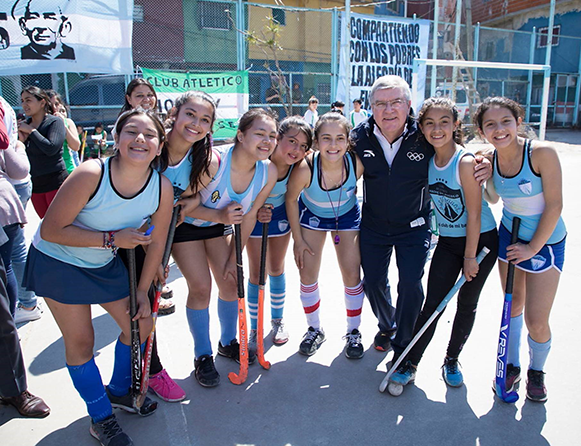 Before the third edition of the Summer Youth Olympic Games (YOG) came to a close in Buenos Aires, Argentina yesterday, the President of the International Olympic Committee (IOC), Thomas Bach, joined local children and Argentina's Rio 2016 Olympic gold medallist Matias Paredes for a hockey session in one of the city’s most deprived areas.

The IOC President and Matias - a YOG Athlete Role Model, visited “Villa 1-11-14” in the southern part of the city - a neighbourhood where youth drug addiction is extremely high. 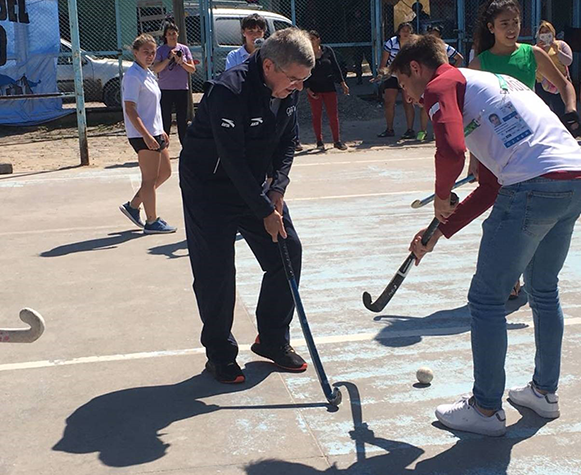 Madre del Pueblo, a local sports club, uses physical activity as a tool to engage with the young people in this area, provide them with a meaningful activity, give them perspective and raise awareness about health issues. The club is supported by the city and the Catholic Church. The IOC President was welcomed by Gustavo Carrara, Bishop of Buenos Aires.

In a move to bring the YOG spirit to Villa 1-11-14, Madre del Pueblo organised a day of fun sport activities for the local kids on 14 October, which included hockey, football and roller skating. With the logistical support of the Pan American Hockey Federation, FIH supplied hockey sticks and balls which were graciously received by the young, motivated players. 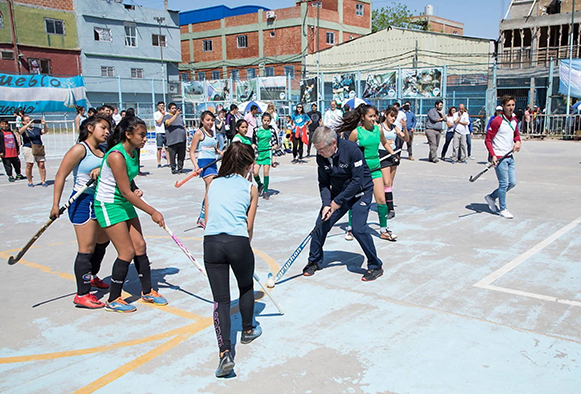 After a quick introduction to some basic hockey techniques by Matias, the IOC President, Olympic champion in fencing, enjoyed showcasing his skills with some of the local children.

The Youth Olympic Games in Buenos Aires were a huge success for Hockey5s, with the venue in the Youth Olympic Park attracting over 100,000 spectators across the eight days of competition. Malaysia men and Argentina women won their first ever YOG Hockey5s gold medals, but there were many more winners. Facundo Sarto, member of the Argentinian men’s team, which picked up bronze medals, said: "We have been able to showcase our Argentinian character to the world. For our sport, we've shown that hockey in Argentina is one big party. Hopefully this will attract new people into the game in the future."