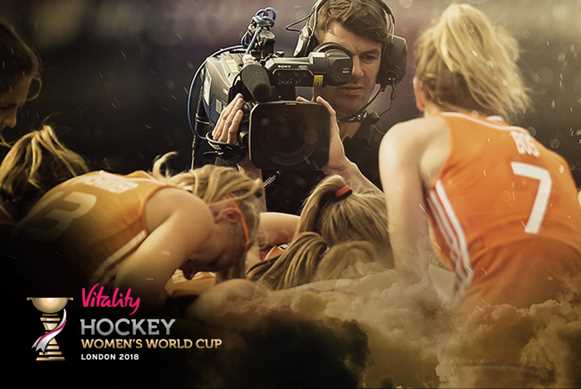 The International Hockey Federation (FIH) and host broadcaster BT Sport have announced world-class innovations that will make this year’s global coverage of the Vitality Hockey Women’s World Cup London 2018 the best in the sport’s history.

BT Sport will make 2018’s biggest women’s sporting event a showcase for its technological capabilities. Innovations never seen before in the sport will bring fans much closer to the action, increasing engagement and excitement for those watching via FIH’s international network of broadcast partners.

Viewers tuning in to this year’s action will witness the best-ever picture and sound for such an event. The use of Ultra-High Definition (UHD) will provide a more natural, true-to-life visual experience that is closer to how people see action in real life.

Dolby Atmos® sound will also be used for the first time at a hockey event to provide a truly immersive experience. This technology transports viewers into the action with moving audio that flows all around with breathtaking realism. Sound moves in a three-dimensional space, which will make fans feel like they are inside the stadium, on the hockey pitch.

Along with Hawk-Eye’s SMART Replay system and new hockey specific ball tracking technology, a total of 26 cameras will cover all the action from London, providing more angles to choose from than ever before.

In terms of content, BT Sport will produce one single programme each day. This will give viewers the opportunity to watch all of the action from the very first match of the day until the very last match. This provides fans with non-stop hockey coverage, with all of the match action supplemented by in-depth analysis from the BT Sport team led by Chris Hollins and Sam Quek with Kate and Helen Richardson-Walsh, Crista Cullen, Mel Clewlow and Simon Mason plus features on athletes, coaches and the sport in general.  BT Sport will also make England’s first game against India on July 21st available for anyone to watch on the BT Sport App.

Over 80 hours of live content from the World Cup will be broadcast to over 150 countries via FIH’s global broadcast partners. In addition to this, the FIH YouTube channel will provide coverage to fans in territories where no broadcast partnerships are in place.

This will be the biggest worldwide TV distribution of a FIH World Cup ever. For the first time in the event’s history, fans from every single participating nation will be able to tune in to the action, with many more territories also picking up the coverage from London.

Speaking about the Vitality Hockey Women’s World Cup London 2018 and the impact made by BT Sport, FIH President Dr Narinder Dhruv Batra said: “The FIH is fully committed to delivering the highest quality pictures and sound at the Vitality Hockey Women’s World Cup London 2018. By working in collaboration with the innovative production team at BT Sport, we have been able to use pioneering technology and television production techniques that will benefit of our athletes, fans and the sport in its entirety. BT Sport’s production team will clearly demonstrate what can be achieved in terms of how to best televise one of the world’s most exciting and fastest moving sports.

He continued: “The Vitality Hockey Women’s World Cup London 2018 is a colossal event that will be watched the world over. This is clearly reflected by the partnerships agreed with many of the world’s leading broadcasters as part of the biggest TV distribution in Hockey World Cup history. Our partners will be key to helping us to connect with new fans across the globe, something which is a core component of our long-term Hockey Revolution strategy to become a global game that inspires future generations.”

The following platforms in each participating nation will show the Vitality Hockey Women’s World Cup London 2018:

More broadcasters to be announced. All nations without broadcast partners: FIH YouTube