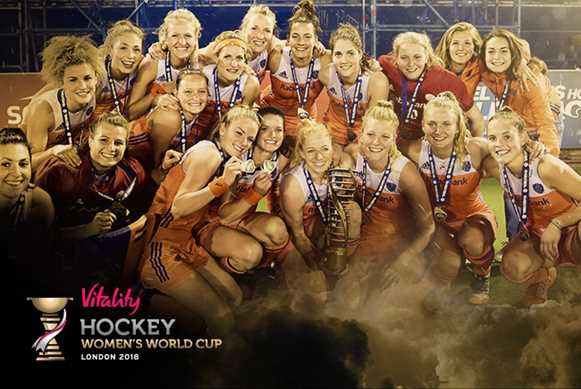 A peek at the pools

As the countdown continues to the opening matches in the Vitality Hockey Women’s World Cup London 2018, we take a look at the pools and how they may pan out.

But first, a quick mention about how the pool system at this event works. The preferred finishing place in the pools is, of course, in the number one spot. Not only does this give the team enormous confidence going into the knock-out stages but it also offers straight passage through to the quarter-finals. For the teams placed second or third, they face a crossover match to earn a place in the quarter-finals. For the team finishing in fourth place in each pool, it is game over.

Pool A: The Netherlands, China, Korea and Italy

The team that strikes fear into all its rivals is the reigning World Cup holder, the Netherlands (FIH Hero World Ranking: 1). This year’s line-up is blessed with talent, from multi-decorated Olympians such as Lidewij Welten and Carlien Dirkse van den Heuvel to the young players who do not know what it is to lose, such as Pien Sanders and Frederique Matla. And at the helm is Alyson Annan, a coach who knows just what it takes to be a consistent winner.

Leading the charge to dethrone Oranje are the two Asia giants, China (WR:8) and Korea (WR:9). Both met the Netherlands in both the FINTRO Hockey World League Semi-Final in Brussels and the Hockey World League Final and both came up short, but this is another day and another challenge.

The fourth contender in Pool A is Italy (WR:17), a team that is energetic and relatively unknown in these hockey circles. Head Coach Roberto Carta and his squad will view each game as a final, where anything can happen.

There will be a weight of expectation on the shoulders of the England (WR:2) players which will serve to either inspire or destroy them. The question is whether the experience of captain Alex Danson, Head Coach Danny Kerry and the numerous Rio 2016 Olympic gold medallists in the team can help the entire squad overcome nerves to play to their potential.

While England’s position as host nation offers an unquestionable weight, USA (WR:7) will also have high hopes of bettering their 2014 World Cup performance, where they performed brilliantly to finish in fourth place. Then they were rank outsiders, now they are medal contenders. Their question mark is whether they have the tactical ability to match their energy and challenge for a podium place.

India (WR:10) and Ireland (WR:16) are both teams who can throw surprises. India are getting better with every passing tournament, while Ireland will play each game with their usual energy and indomitable spirit. This pool has the potential for some world ranking upsets.

Rebuilt and bristling with ambition, Argentina (WR:3) arrive in London with high hopes of a medal. Standing in their way in this pool are three teams that all have the players to provide an upset. Adrian Lock’s Spain (WR:11) have a talented and experienced team that is awash with speedy, aggressive players. Leading the team is Georgina Oliva, who has nearly 200 appearances and is Spain’s creative hub.

South Africa (WR:14) is a team with a point to prove, having missed the 2016 Olympics due to a lack of support from its own National Olympic Committee. The team will be determined to establish themselves back at the top table at a major international and all the more dangerous for that ambition.

And Germany (WR:6) will always be a threat. The team has been on the up recently, with a bronze medal at the Rio 2016 Olympics and a glorious gold medal at the Indoor World Cup. Long-serving captain Janne Müller-Wieland and her team would love to be crowned double World Cup champions and they have the balance and experience in their squad to make that happen.

A silver medal at the Sentinel Homes Hockey World League Final in December 2017, a Commonwealth Games gold medal in April 2018, and a jump up the FIH Hero World Rankings to fourth – it has been a good few months for New Zealand. Head Coach Mark Hager and his team will hope to keep that winning momentum going into London. They will be a dangerous opponent for whoever they face, particularly as the tournament draws on into the latter stages.

Last edition’s silver medallists Australia (WR:5) are looking for a return to former glories and this would be a perfect stage for that ambition. Paul Gaudoin has an energetic and forceful squad who, if they get on a roll, will be difficult to stop. When the Hockeyroos are good, they are very good, but as they proved at the FINTRO Hockey World League Semi-Finals in Brussels, they can also be a little fragile under pressure.

Japan (WR:12) and Belgium (WR:13) are squads that are building. Belgium admit that they have a long term plan to follow in the footsteps of their male counterparts, the Red Lions. A good performance in London will catapult the Red Panthers into the big time and, with thoughtful coach Niels Thijssen at the helm, they cannot be discounted.

For Anthony Farry and Japan, the Vitality Hockey Women’s World Cup London 2018 is a chance to see how much progress the next hosts of the Olympic Games have made in recent months. Japan are a team that tend to finish in the mid to low positions in the major events so they will need to be at their best to change that this time around. The question will be – has Farry had enough time to instil a winning mentality?

To see a schedule for all the pool matches, click here.