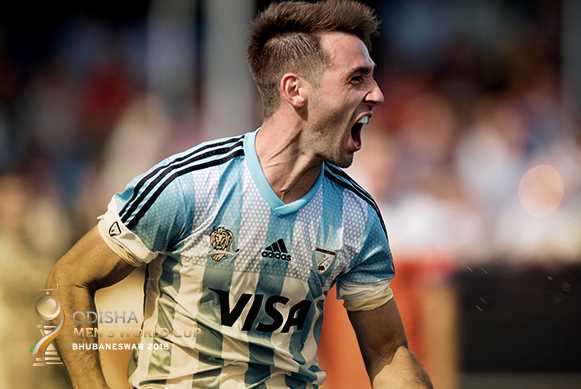 Who will top the pools at the Odisha Hockey Men’s World Cup Bhubaneswar 2018?

With the start of the Odisha Hockey Men’s World Cup Bhubaneswar 2018 less than one week away, the final countdown to the global showcase is well and truly on. Ahead of the start of action at the revamped, 15,000 capacity Kalinga Hockey Stadium, we take a look at the teams who will face each other in each of the four pools.

A guaranteed birth in the competition quarter-finals is on offer to the team that finishes top of each group, with the second and third placed finishers needing to play an extra cross-over play-off match for their place in the last eight. For the teams that finish bottom of each pool, elimination beckons. Expect every match to be intense and action-packed.


Pool A: Argentina (FIH Hero World Ranking: 2), Spain (WR:8), New Zealand (WR:9) & France (WR:20)
While Olympic champions Argentina will rightly be regarded as the hot favourites to win Pool A, they will certainly not it all their own way. Los Leones (The Lions) are blessed with some wonderful player, with Lucas Vila being one of the best attackers around while Gonzalo Peillat is quite possibly the finest penalty corner drag-flicker in the game. That said, all three of the other teams in Pool A are capable of upsetting the Pan-American champions.

Spain Head Coach Frederic Soyez has stated that his team are capable of challenging for the medal positions, and his squad selection more than justifies that optimism. Vast experience comes from 200-capped athletes such as goalkeeper Quico Cortes, Sergi Enrique, Miguel Delas and Pau Quemada, while the outrageously gifted young attacker Enrique Gonzales is certainly a player capable of hurting any opponent. New Zealand’s Black Sticks are another team containing plenty of world level experience, with team captain Blair Tarrant well aware that his team can match anyone on their day, whilst France – lead by towering defender and penalty corner expert Victor Charlet – will be keen to make the most of their first World Cup in 28 years.

Pool B: Australia (WR:1), England (WR:7), Ireland (WR:10) & China (WR:17)
Back at the top of the FIH Hero World Rankings after being briefly usurped by Argentina, Australia’s Kookaburras are searching for a third successive World Cup triumph following their stunning victories in Delhi (2010) and The Hague (2014). Their recent record in India is impressive, especially in Bhubaneswar, having claimed the title there at last year's Hockey World League Final. Jake Whetton, Trent Mitton, Jeremy Hayward and Blake Govers are all regular goal-scorers for the title holders. It will take a very special team to stop the side coached by former Kookaburra and 1986 World Cup winner Colin Batch.

England Head Coach Danny Kerry will certainly do everything in his power to implement a plan to overcome the Australians – he did something similar at the Rio 2016 Olympic Games when he guided Great Britain’s women to gold by defeating the top ranked Netherlands team. The 400+ capped Barry Middleton remains a hugely influential player for England, while prolific striker Sam Ward gives the team a cutting edge up front. Ireland’s Green Machine, who return to World Cup action for the first time since 1990, have proven in recent years that they cannot be underestimated. The 2015 European bronze medallists have a world class goalkeeper in David Harte, while Shane O’Donoghue is a dynamo at the heart of the midfield. For China, this is their first ever appearance at a men’s World Cup and find themselves facing stiff opposition. However, if penalty corner expert Du Talake is firing then they have every chance of upsetting the odds.

Pool C: Belgium (WR:3), India (WR:5), Canada (WR:11) & South Africa (WR:15)
An Olympic silver medal claimed at Rio 2016 means that Belgium’s Red Lions will be regarded by many as the team to beat in Pool C. A dramatic rise up the rankings in recent years sees them now rated as the third best team in the world. They blessed with numerous truly world class individuals including Rio 2016 silver medallists Cedric Charlier, Tom Boon, John-John Dohmen, Thomas Briels, Simon Gougnard, Felix Denayer, Arthur Van Doren and Vincent Vanasch, the latter two being named the respective Men’s Player and Goalkeeper of the Goalkeeper of the Year for 2017 at the FIH Hockey Stars Awards. With so much talent at their disposal, Belgium should be regarded as serious contenders for the title.

However, topping Pool C will certainly not be a simple task for Belgium. Host nation India will be powered on by huge crowds during all of their matches, with Head Coach Harendra Singh keen to lead the senior side to World Cup glory as he did with the Indian U-21 team at the Junior World Cup in Lucknow two years ago. Many of those up and coming players have been selected for the senior side, with Harmanpreet Singh, Varun Kumar, Sumit, Nilakanta Sharma, Simranjeet Singh and Mandeep Singh all chosen to represent the nation on this incredible stage. Canada, captained by defensive rock Scott Tupper, have regularly proven themselves against supposedly superior opposition and will be looking to do so once again in Bhubaneswar, as will African champions South Africa and their talismanic defender Austin Smith.

Pool D: Netherlands (WR:4), Germany (WR:6), Malaysia (WR:12) & Pakistan (WR:13)
While Netherlands and Germany are widely expected to be front-runners for that all-important first place finish, Pool D certainly has the potential to be unpredictable. The Dutch are the pool’s highest ranked team and the reigning European champions, with Head Coach Max Caldas getting the best out of a talented group that many believe has the potential to lift the trophy in Bhubaneswar. They have numerous world class individuals amongst their ranks including star midfielders Billy Bakker and Robbert Kemperman, while brilliant goal-scorer Mirco Pruijser, resurgent attacker Jeroen Hertzberger and penalty corner expert Mink van der Weerden are all capable of producing game-changing moments.

Germany are another team with quality in abundance. Florian Fuchs and Christopher Rühr are world class attackers, as is rising star Timm Herzbruch, who will be keen to show his exceptional abilities after a lengthy injury lay-off. Behind the forward line are some exceptional midfielders including Tobias Hauke and Mats Grambusch, while team captain Martin Häner is a rock at the heart of the team’s defence. Challenging the Netherlands and Germany are Malaysia and Pakistan, two teams that are not exactly short of talent themselves. Faizal Saari is a wonderful attacking midfielder for a Malaysia team now being coached by Roelant Oltmans, the Dutchman whose numerous accolades include winning World Cups with both the Netherlands women (1990) and men (1998). Four times World Champions Pakistan are another team with great talent and the ability to cause an upset. Green Shirts captain Muhammad Rizwan Sr will be single-minded in his ambition to ensure that his side performs to the best of their abilities in Bhubaneswar.


As well as welcoming the world’s greatest hockey teams, the state of Odisha is also holding two studded occasions ahead of the start of action. On Tuesday 27 November, a sell-out crowd will witness a very special opening ceremony that will feature a performance from Oscar-winning music maestro A R Rahman as well as appearances from prominent Bollywood celebrities. A day later (Wednesday 28 November), the 40,000 capacity Barabati Stadium in nearby Cuttack will see Mr Rahman and numerous other stars taking part in a World Cup Celebration event, where massive crowds are again expected in attendance. Following the show, India’s World Cup opener against South Africa will be broadcast live to an excited crowd via giant screen in the stadium. An electric atmosphere at both events is widely expected. Tickets for the World Cup Celebration in Cuttack are still available and can be purchased by clicking here.

For all information regarding the Odisha Hockey Men’s World Cup Bhubaneswar 2018, including the full schedule, teams, news and more, click here.