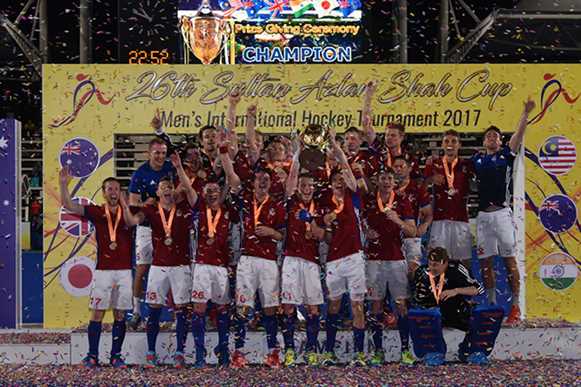 FIH YouTube Channel to broadcast event to a near global audience

One of the world’s most prestigious international hockey events in the world gets underway this weekend, with the Malaysian city of Ipoh playing host to the 27th Sultan Azlan Shah Cup.

The globally famous invitation competition has always attracted the very best that the game has got to offer, and with all six of the competing nations having qualified for the Odisha Hockey Men’s World Cup Bhubaneswar 2018 event that takes place in India at the end of this year, this edition will certainly be no different.

This year’s event will be available to a near global audience via the FIH's YouTube Channel, giving hockey fans located outside territories where broadcast agreements are in place the opportunity to watch all of the action from Ipoh.

Between Saturday 3 and Sunday 10 March, Australia (FIH Hero World Ranking: 1), Argentina (WR:2), India (WR:6), England (WR:7), Ireland (WR:10) and home favourites Malaysia (WR:12) will fight it out not just for the Sultan Azlan Shah title but also the chance to gain a small but potentially significant psychological advantage against their World Cup rivals.

Fascinatingly, three of the competing nations in Ipoh will feature in the same pool at the Odisha Hockey Men’s World Cup Bhubaneswar 2018, with reigning champions Australia, England and Ireland all competing in Pool B.

In the more immediate future, four of the six nations playing in Ipoh will be in action at next month’s Commonwealth Games, which takes place on Australia's Gold Coast. The mighty Kookaburras are the reigning Commonwealth champions and will compete in Pool A, while fellow Sultan Azlan Shah Cup competitors India, England and Malaysia will all go head-to-head in Pool B.

The Sultan Azlan Shah Cup has always been far more than a preparation event for other competitions. It is a tournament held in high regard highly by players and coaches alike, due in part to the exceptional standard of the competing teams as well as the incredible atmosphere generated within the host stadiums, where thousands of fans take full advantage of the opportunity to witness the very best in the world showcasing their skills.

As the two top ranked teams in world hockey, the chance to witness world champions Australia and Rio 2016 Olympic gold medallists Argentina in action at the Bukit Jalil National Hockey Stadium is certainly an attractive proposition for any hockey fan.

Team captain Mark Knowles is a multiple winner of this event and, following his decision to retire from international hockey after the Commonwealth Games, will be desperate to add one more title to his collection in his final appearance.

Pan-American champions Argentina arrive in Ipoh with a strong side that includes defender Gonzalo Peillat, arguably the world’s most lethal exponent of the penalty corner drag-flick. He is a proven match winner, as is attacking star Lucas Vila.

Numerous players in the Argentina line-up seem to be defying the march of time, with 36-year-olds Matias Paredes and Juan Gilardi as well as 38-year-old goalkeeper Juan Vivaldi playing some of the best hockey of their lives. The fallout in relation to the recent resignation of Olympic gold medal-winning coach Carlos Retegui has yet to be seen, but the talent within the group ensures that Argentina remain a force to be reckoned with as they aim to add a second Sultan Azlan Shah title to the one they claimed in 2008.

India, the champions of Asia and five time winners of the Sultan Azlan Shah Cup, are the third highest ranked team competing at this year’s event, with Head Coach Sjoerd Marijne having named veteran star Sardar Singh as captain. It is a welcome return to action for Sardar, who will be aiming to impress as he bids to earn a place in India’s Commonwealth Games squad. Sardar will lead a young but talented group of athletes in Ipoh and the team are certain to be dangerous.

Featuring numerous players who were part of the Great Britain team that won the Sultan Azlan Shah Cup in 2017, Bobby Crutchley’s England will rightly feel optimistic about their chances of success. Although James Albery has been forced to withdraw after sustaining a fracture in his foot, the squad named contains a wealth of talent and experience. At 34, attacking midfielder Barry Middleton remains a central figure and will add to his incredible tally of 402 international appearances, while 2017 Hockey Stars Goalkeeper of the Year nominee George Pinner and brilliant goal-scorer Sam Ward are also impressive performers.

Ireland’s rise to prominence over the past few years has been well documented, with last year’s qualification for the Odisha Hockey Men’s World Cup Bhubaneswar 2018 being hard earned and thoroughly deserved.

The competition in Ipoh will provide invaluable experience on their journey to Bhubaneswar, where they will compete in their first World Cup competition since the 1990 event in Lahore, Pakistan.

Although the team are missing twin brothers Conor and David Harte, star defender and goalkeeper respectively, the side selected by head coach Craig Fulton contains plenty of quality. Shane O’Donoghue is key player for the Green Machine, being a midfielder who regularly scores from open play and penalty corner situations.

Despite having hosted 26 editions of the Sultan Azlan Shah Cup, home favourites Malaysia are still waiting for their first ever title success and will be hoping that this will be their year.

They were in superb form during 2017, especially at the Hero Hockey World League Semi-Final in London. A fourth place finish behind the Netherlands, Argentina and England was hugely impressive, finishing above four nations who at the time sat above them in the FIH Hero World Rankings.

Razie Rahim and Faizal Saari were both star players in London, netting nine goals between them. Head Coach Stephen van Huizen named both athletes in his initial squad for the competition, with 276-capped Sukri Mutalib captaining the side.

The action begins on Saturday 3 March with Olympic champions Argentina taking on Asian champions India in the competition opener at 16:00 (local time – UTC +8) before reigning world champions Australia and England clash at 18:05. Host nation Malaysia play Ireland in the final match of the day, scheduled for 20:30.

HOW TO WATCH
The 27th Sultan Azlan Shah Cup will be broadcast in Malaysia by Astro, with Star Sports and Fox Sports broadcasting the event in India and Australia respectively.

Due to existing broadcast rights agreements, the matches shown on the FIH YouTube Channel will be geo-blocked in the following territories: India, Pakistan, Bangladesh, Nepal, Maldives, Sri Lanka, Bhutan, Australia, Malaysia and Brunei.

All other countries will be able to view on You Tube as free to air.

About the Sultan Azlan Shah Cup
The Sultan Azlan Shah Cup has been an annual feature in the FIH calendar since 1998, although it initially started life in 1983 as a biennial event. The event is named after legendary hockey fan and former FIH Executive Board Member HRH Sultan Azlan Shah, the ninth Yang di-Pertuan Agong (King) of Malaysia, who sadly passed away in 2014. Although the man known as ‘the father of Malaysian Hockey’ is no longer with us, both his name and legacy lives on in this ever-entertaining competition.

FOLLOW
To keep up to speed on all the action from the 27th Sultan Azlan Shah Cup, click the links below.