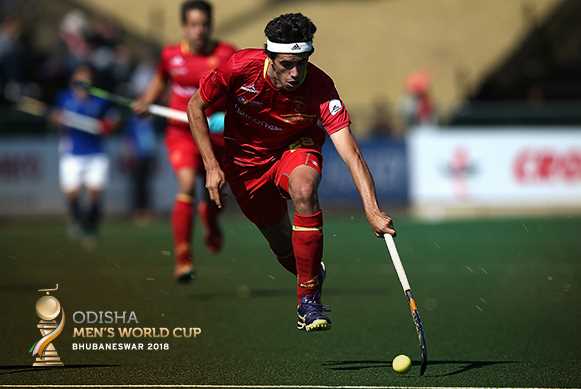 With numerous Olympic gold medallists, World Cup winners and FIH Players of the Year on show, the Odisha Hockey Men’s World Cup Bhubaneswar 2018 is an event containing the very best that the sport has to offer. Established stars like reigning FIH Player of the Year Arthur Van Doren (Belgium), Olympic champion Lucas Vila (Argentina) and double World Cup winner Eddie Ockenden (Australia) are just three of many superstars that will light up the 15,000 Kalinga Hockey Stadium. However, there is also a new generation determined to leave their mark on this global showpiece. Here is a look at six athletes who could make a big impression in Bhubaneswar.

Maico Casella – Argentina
Age: 21   Caps: 35
The youngest member of the current Argentina squad, Maico Casella was a star performer for the Under-21 team at the Uttar Pradesh Hockey Junior World Cup 2016 in Lucknow, India and has developed into a key component of the senior team. The 21-year-old forward looks at ease playing up front with Olympic gold medallists Matias Paredes and Lucas Vila, who are clearly using their vast experience to aid the development of this gifted young forward.

Jake Harvie – Australia
Age: 20   Caps: 39
The grandson of former Kookaburra and triple Olympian Gordon Pearce, whose four brothers – Harvie’s great-uncles – also represented the national team, defender Jake Harvie is a young man with hockey in his blood. He has taken to the international scene brilliantly, showing class and composure in the Australian defensive line to help the team claim title successes at the Odisha Men’s Hockey World League Final Bhubaneswar 2017, the Gold Coast 2018 Commonwealth Games and the Rabobank Hockey Champions Trophy 2018 in Breda, Netherlands. It is an impressive haul of silverware for a man still very much at the start of his senior international career. With Australia aiming to win a third successive Hockey World Cup title, it has the potential to get even better before the year ends.

Timm Herzbruch - Germany
Age: 21   Caps: 54
A member of the bronze medal-winning Germany team that competed in the Rio 2016 Olympic Games, Timm Herzbruch is a terrific attacking talent and someone with an exceptionally bright future. He was named U19 Player of the Tournament at the Uttar Pradesh Hockey Junior World Cup 2016 in Lucknow, India, and excelled for Germany’s senior team in 2017 before suffering a serious knee ligament injury. After a lengthy lay-off, Herzbruch is back to his best and could be a superstar in Bhubaneswar.

Dilpreet Singh – India
Age: 19   Caps: 36
India Head Coach Harendra Singh has selected numerous athletes who were part of the squad he guided to Junior World Cup glory two years ago in Lucknow. Although Dilpreet, who had only just turned 17 at the time, was not involved in Lucknow, he is another fine example of how Harendra’s faith in India’s youth continues to reap rewards. Dilpreet is an instinctive goal-scorer, as proven by the nine goals in six matches he scored at the 2017 Sultan of Johor Cup U-21 invitational event in Malaysia. That performance earned him a call-up to the senior side, and a year later, he stands on the verge of being India’s youngest player at the home World Cup in Bhubaneswar.

Jorrit Croon – Netherlands
Age: 20   Caps: 56
In 2016, Netherlands Head Coach Max Caldas caused a stir when he selected 17-year-old attacker Jorrit Croon in his squad for the Olympic Games in Rio de Janeiro. Some saw it as a gamble, but Croon’s terrific performances only served to highlight Caldas’s brilliant eye for talent. With over 50 senior international appearances and a European title success under his belt long before his 21st birthday, he is proving himself to be a huge asset to the Dutch team and looks likely to do so for many years ahead.

Enrique Gonzalez – Spain
Age: 22   Caps: 73
The rise of this precociously talented young attacker has certainly caught the eye. At 22, he is already an influential on-field presence for the Red Sticks senior team. Blessed with frightening pace and wonderful stick skills, Gonzalez made a big impression at the Uttar Pradesh Hockey Junior World Cup 2016 in Lucknow, India, being named Player of the Tournament despite Spain finishing sixth. He is a player capable of causing problems for any team.


As well as welcoming the world’s greatest hockey teams and players, the state of Odisha is also holding two studded occasions ahead of the start of action. On Tuesday 27 November, a sell-out crowd will witness a very special opening ceremony that will feature a performance from Oscar-winning music maestro A R Rahman as well as appearances from prominent Bollywood celebrities. A day later (Wednesday 28 November), the 40,000 capacity Barabati Stadium in nearby Cuttack will see Mr Rahman and numerous other stars taking part in a World Cup Celebration event, where massive crowds are again expected in attendance. Following the show, India’s World Cup opener against South Africa will be broadcast live to an excited crowd via giant screen in the stadium. An electric atmosphere at both events is widely expected. Tickets for the World Cup Celebration in Cuttack are still available and can be purchased by clicking here.