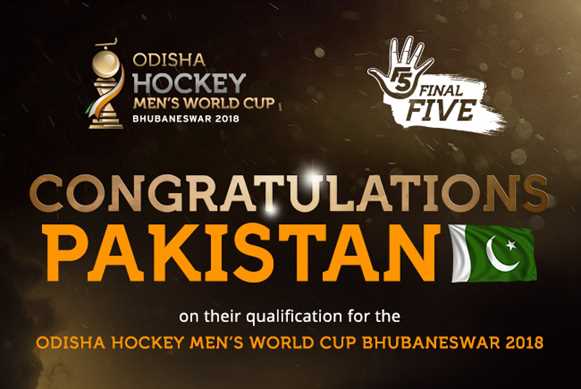 The Green Shirts, currently ranked 14th in the FIH Hero World Rankings, finished in seventh position in the Hero Hockey World League Semi-Final in London, meaning they faced an anxious wait to see if that was good enough to earn them qualification to the blue riband event that takes place in India next year from 28 November to 16 December.

The results at the Rabobank EuroHockey Championships, which are currently taking place in Amsterdam, Netherlands, have gone very much in favour of Pakistan, with all four of the semi-finalists having already qualified for the World Cup via the Hockey World League route.

Pakistan become the 13th team to qualify for next year's global showpiece, joining host nation India, Argentina, Australia, Belgium, Canada, England, Germany, Ireland, Malaysia, Netherlands, Spain and New Zealand. They have an envious record in the competition, having claimed the title on four occasions, more than any other nation. It is a welcome return to World Cup action for this famous hockey playing nation, following their failure to qualify for the Rabobank Hockey World Cup 2014, which was played in The Hague, Netherlands.