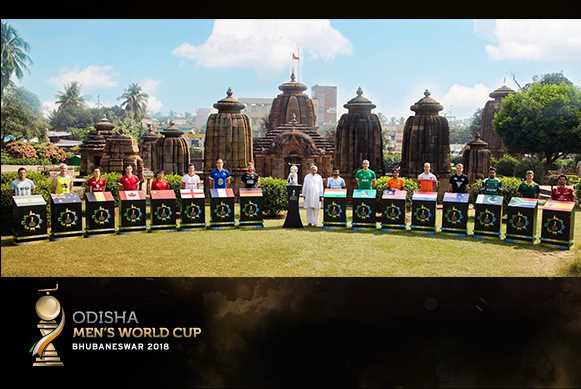 Bhubaneswar, India:The wait is almost over. After five years of intense planning, preparation and a stunning rebuild of the now 15,000 capacity Kalinga Hockey Stadium, the Indian city of Bhubaneswar and the State of Odisha is ready to host to the world’s finest men’s international hockey teams.

With the on-field action at the Odisha Hockey Men’s World Cup Bhubaneswar 2018 beginning on Wednesday 28 November, the level of excitement ahead of the start of this global sporting showpiece cannot be underestimated. Images of hockey’s superstars adorn billboards and buildings across a city that has wholeheartedly embraced the once-in-a-lifetime opportunity to host a sporting spectacle with a glorious heritage. History will be made in Bhubaneswar, and thousands of fans will be there to witness all of the action at a truly world class hockey arena.

On Monday 26 November, the captains of all 16 competing teams joined Odisha’s Chief Minister Shri Naveen Patnaik at Bhubaneswar’s impressive Mukteshwar Temple for a special commemorative photo alongside the prize that they are all here to fight for: the World Cup trophy itself. Whilst it remains to be seen which of these men will lift this iconic trophy on Sunday 16 December, it promises to be a fascinating 19-day journey of discovery.

Before the action begins, today (Tuesday 27 November) the world will be welcomed to Odisha at an opening ceremony that will celebrate not just the event but also the city, the region and the country. Taking place in the nearby Kalinga Athletics Stadium, a sell-out crowd will witness a stunning show that will feature a performance from Oscar-winning music maestro A R Rahman as well as appearances from prominent Bollywood celebrities.

As if that were not enough, a second celebration will take place on Wednesday (28 November) in the nearby city of Cuttack, where the 40,000 capacity Barabati Stadium will see Mr Rahman and numerous other stars taking part. Following the show, India’s first match, against South Africa, will be broadcast live to an excited crowd via giant screen in the stadium.

The competition format in Bhubaneswar is the same as that which was employed at the Vitality Hockey Women’s World Cup earlier this year, with the 16 competing nations split into four pools of four. A guaranteed birth in the competition quarter-finals is on offer to the team that finishes top of each group, with the second and third placed finishers needing to play an extra cross-over play-off match for their place in the last eight. For the teams that finish bottom of each pool, elimination beckons. It is a format that certainly keeps things interesting and has the ability to throw up a few surprises.

The pool phase of the event in Bhubaneswar sees each day of competition ‘group focused’ throughout, with two Pool C matches getting the tournament off to a flying start on Wednesday evening. Olympic silver medallists Belgium (FIH Hero World Ranking: 3) begin their quest for a first ever World Cup title when they face Canada (WR:11) at 1700 India Standard Time (UTC +5.30). Belgium’s gifted squad is blessed with numerous world class players including Arthur van Doren and Vincent Vanasch, the respective FIH Player and FIH Goalkeeper of the Year for 2017 respectively. Canada have plenty of quality of their own, especially in the shape of inspirational defender and penalty corner expert Scott Tupper, who will be looking to guide his team to what would be a famous victory.

While there is plenty of intrigue surrounding the opening fixture, for the vast majority of the sell-out 15,000 crowd it is merely a warm-up for the main event as host nation India (WR:5) go head-to-head with African champions South Africa (WR:15) at 1900 IST. India Head Coach Harendra Singh and a significant portion of his squad were part of the glorious Junior World Cup success on home soil Lucknow two years ago, and a strong start here in Bhubaneswar could be the catalyst for something very special on an even bigger stage. However, Harendra will not allow his team to get carried away with the occasion – with the experience of Austin Smith, Rhett Halkett and team captain Tim Drummond, South Africa are a side capable of punishing any level of complacency from the home favourites.

On competition days two, three and four, the focus will switch from Pools A to B to C, with matches taking place at 1700 and 1900 each day. The Pool A fixtures on Thursday 29 November will see Rio 2016 Olympic gold medallists Argentina (WR:2) face a Spain team packed with flair in what promised to be a thrilling encounter before the Black Sticks of New Zealand (WR:9) go head-to-head with France (WR:20), a team returning to World Cup action for the first time in 28 years.

Friday 30 November is all about Pool B, with reigning world champions Australia (WR:1) beginning their title defence against an Ireland (WR:10) team keen to show just how much progress they have made in recent years at what is their first FIH Men’s World Cup since 1990. England (WR:7) take on China (WR:17) in the evening match, with Danny Kerry’s team looking to get their competition off to a winning start.

The first round of pool matches will be completed on competition day four as the Pool D teams take to the stage. The Netherlands (WR:4) take on Malaysia (WR:12) in a fascinating encounter that will see legendary Dutchman and current Malaysia Head Coach Roelant Oltmans aiming to defeat a team that he guided to World Cup glory at the 1998 event in Utrecht. That match is followed by a meeting between two nations that have claimed between two nations that have won six world titles between them, as two-time champions Germany (WR:6) take on four-time winners Pakistan (WR:13).

Tickets for the World Cup Celebration in Cuttack are still available and can be purchased by clicking here.

The finalised 18-player squads for the event were confirmed at 1200 IST on Tuesday 27 November 1200. To download the team lists in PDF format, click here.