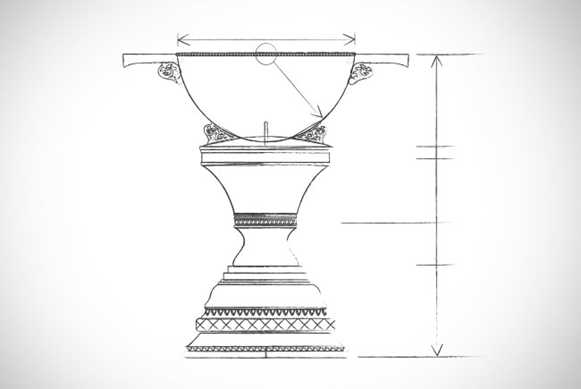 Pakistan men has a proud history in hockey, winning Olympic gold in 1960 (Tokyo) and 1968 (Mexico). While the Olympics offered the pinnacle event for the sport, it was a multi-sport event, so interest in hockey was diluted. This was something that the hockey-loving Pakistan Hockey Federation wanted to address, so it was almost inevitable that the suggestion of a World Cup came from the Asian hockey giants.

The creation of a Hockey World Cup and the commissioning of a trophy was driven by the President of Pakistan Hockey Federation, Air Marshal Nur Khan. As hockey journalist Ijaz Chaudhry explains, it was under Nur Khan's guidance that Pakistan staged a very successful nine nation tournament in Lahore in March 1969. It was during the course of this tournament that the Air Marshall presented the idea of a hockey world cup to Rene Frank, then President of the International Hockey Federation (FIH).

Khan stressed how important it was for the sport to have more than one world level tournament, it should, he said, take a leaf out of football’s book and have its own World Cup.

The first National Association to back up the Pakistan proposal was near neighbour, India, and so the idea began to develop.

There was opposition to the idea: one argument was that, as an amateur sport, hockey would not be able to sustain two world level events.

Fortunately for the sport, this argument was countered and in 1971, the inaugural World Cup was played in Barcelona, Spain. This was a change to the original plan, which was for the match to be staged in the Pakistani city of Lahore – unfortunately the political situation in Pakistan after the general elections of 1970 was too tense for the tournament to be held there.

Not only did Pakistan introduce the idea of a World Cup to the hockey community, it also designed the trophy. The original design was a single piece trophy in the form of a gold and silver-plated hockey stick. However, the then Pakistan Hockey Federation President, Lt.General K.M.Azhar envisioned something different, and a little more ambitious.

As Chaudhry writes: 'The Hockey World Cup is a masterpiece of craftsmanship. Carved out of gold and silver, it exhibits a hockey stick and ball sticking on top of an embellished big globe.”

The designer was Basheer Moojid and the actual workmanship was carried out by members of the Electrical and Mechanical Engineers Corps of the Pakistan Army.

This World Cup was formally presented to Rene Frank in Brussels by the Pakistani ambassador in Belgium, where FIH were headquartered at the time.

And in a neat conclusion to the story of the creation of the men's Hockey World Cup, it was Pakistan who lifted the trophy, after defeating Spain 1-0 in a tense, highly-charged final.

The goal-scoring hero for the ‘Green Shirts’ on that historic occasion was Akhtarul Islam, who scored the solitary goal from a penalty corner. And so an institution was born.

Since then, the trophy has been passed to the hands of hundreds of champions, athletes who have helped their team to the Hockey World Cup title. Which team will be placing their hands on this iconic trophy as World Cup champions in 2018? Don’t miss out on history.