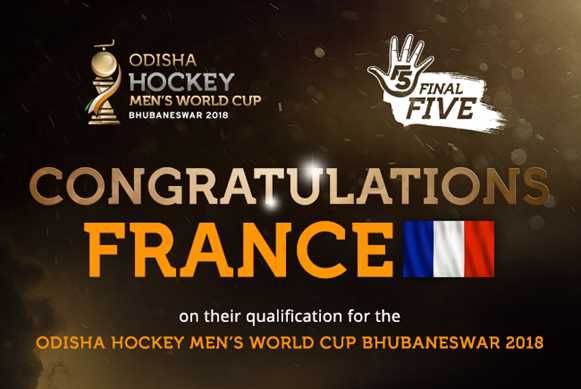 France have become the latest team to qualify for the Odisha Hockey Men's World Cup Bhubaneswar 2018 thanks to favourable results at the Oceania Cup, which is currently being played in Sydney.

Under FIH regulations, the team that wins its continental qualifier automatically qualifies for the World Cup. However, as both Australia and New Zealand have already qualified for next year’s tournament in India thanks to their respective third and sixth place finishes at the Hockey World League Semi-Final in Johannesburg earlier this year, a World Cup qualification spot opened up for France, who were next in line for a ticket to Bhubaneswar.

France, who are 16th in the FIH Hero World Rankings, finished seventh at the Hockey World League Semi-Final in Johannesburg in July thanks to a 3-0 victory over Egypt in their final game of the competition. It left them third behind New Zealand and Pakistan - who were assured of World Cup places after results at the Pan American and European Continental Championships went their way - in a list of countries waiting to learn their fate.

France are the 14th team to achieve men’s World Cup qualification, joining hosts India, Argentina, Australia, Belgium, Canada, England, Germany, Ireland, Malaysia, Netherlands, New Zealand, Pakistan and Spain at the prestigious 16 nation event. They will be competing in their first Hockey World Cup since the 1990 event in Lahore, Pakistan. After a 28 year absence, it will be a welcome return to a stage on which they admirably performed in their two previous appearances. France participated in the inaugural event 1971, achieving a fine seventh place finish in Barcelona, Spain before repeating the feat 19 years later in Lahore, where they also finished seventh.

The final two men's World Cup qualification places will be decided by the outcomes of the upcoming Continental Championship events in Asia - currently taking place in Dhaka, Bangladesh - and Africa (22-29 October 2017).

The Odisha Hockey Men's World Cup Bhubaneswar 2018 will be held at the Kalinga Stadium from Wednesday November 28 to Sunday December 16, 2018.