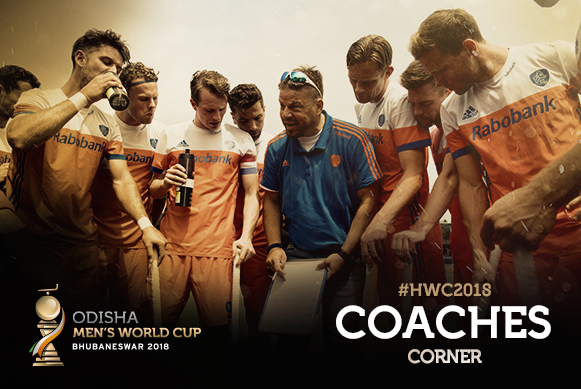 Coaches corner: Netherlands look to take it to the Max in Bhubaneswar

The team currently ranked at four in the FIH Hero World Rankings won the Rabobank EuroHockey Championships in 2017 and have shown flashes of brilliance in recent competitions. But consistency in every match will be key to Caldas doing the men’s and women’s ‘double’.

The Netherlands, who have won the World Cup on three occasions [1973, 1990 ad 1998] and who were runners-up to Australia in 2014, will start their national training programme on 21 October. Until that time, national duty has come second to club hockey.

"It will only be a 'long' tournament if you do well, if you don’t it is really short and to be honest, once you are in a good place, times takes a different form altogether." Max Caldas, Netherlands

During a four-week training programme, the Oranje will play practice matches against Ireland and Belgium. They also have a training camp in Valencia. The team arrives in Bhubaneswar on 24 November, where they will play a practice match against South Africa.

Caldas is very aware that the Odisha Hockey Men’s World Cup is a very open contest, with a number of teams capable of making the podium. “There are a whole group of teams capable of winning the men’s World Cup,” he says. “And you always have 'giant killers' looming in, so it will be a very contested tournament. We are working to get ourselves in a position to be one of the contenders for the title.”

While the Head Coach has identified improving the “base performance”, as key to his team’s potential to be title contenders, he praises the players’ attacking mindsets. “I think we have a very attack-minded team that creates chances from open play and penalty corners. They are a bunch of very skilful players: fast and with a strong understanding of each others’ qualities.”

As ever, hockey in the Netherlands is in a very healthy state with a lot of players coming through the ranks to high performance levels. While Caldas was giving nothing away on his forthcoming squad selection, he did concede that the process was going to be “very interesting”, with a crop of young players challenging for places.

On the question of how he mentally prepares his players for the challenges ahead and the pressure of World Cup hockey, Caldas says he uses people from outside the Dutch hockey system to challenge his processes and choices, thus giving a much wider perspective to all aspects of training and performance.

The “open-book” approach extends to the players too: Caldas says the management involves the players in choices and decisions that affect them.

The Odisha Hockey Men’s World Cup Bhubaneswar 2018 will have more rest days than are normally experienced in international tournaments. This calls for a new approach to training and rest days. Again, Caldas has stepped outside the immediate circle of advisors to get guidance and information.

“I have had contact with some coaches after the Women’s World Cup. I asked them about their experiences, what they came across and how they dealt with certain new situations. We have spoken internally, with players and staff, about how we will set our training processes during the World Cup. We will carefully plan our rest days and our extra activities too.

"It will only be a 'long' tournament if you do well, if you don’t it is really short and to be honest, once you are in a good place, times takes a different form altogether, so we are looking to put ourselves on the right path and see how it goes from there on."

The Netherlands are in Pool D, with Germany, Malaysia and Pakistan. They open their Odisha Hockey Men's World Cup campaign on 1 December against Malaysia. For further information and a full playing schedule, click here.