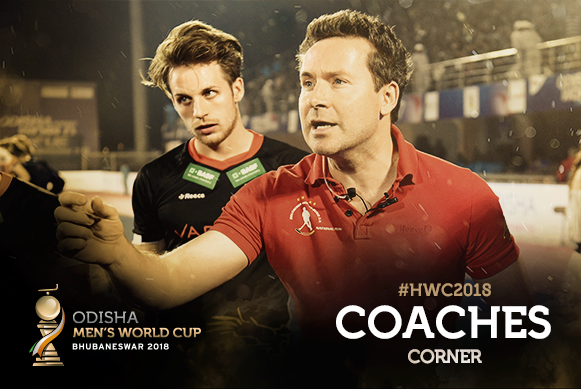 Stefan Kermas is Head Coach to the German men’s team and, as such, he will be eyeing the forthcoming Odisha Hockey Men’s World Cup Bhubaneswar 2018 with relish.

“l really like this kind of ‘pressure’,” says Kermas. “For me leading a team and fighting against the best in the world is more an honour than a big pressure. Focusing on targets and development helps me to be as clear as possible in my role as a coach.”

Germany has a strong history in world cup competition. Winners in 2002 and 2006, they have also been runners-up twice [1986 as West Germany and 2010] and took bronze in 1998. With a strong, settled squad, the team ranked sixth in the FIH hero World Rankings will be looking to make the podium and challenge for top honours.

FIH caught up with Kermas ahead of a period of intensive training for Honamas [the nickname of the men’s national team].

FIH: What preparations, including matches, will the squad be going through between now and the World Cup?

SK: We have three more camps between now and the World Cup. Two camps in Germany, which will focus on internal tactical issues, then one last camp with the final World Cup squad in Spain, playing the host team three times in the middle of November.

FIH: How are you mentally preparing the players for the Odisha Hockey Men’s World Cup?

SK: Generally speaking, at first the players have to prepare themselves mentally. The players have to find a clear way of thinking that enables them to play at their best level. Then a team has to find specific solutions for challenges that arise on the pitch. For sure we are working with the team around this topic; looking at how to improve as much as possible in general play but particularly how to ‘deliver’ in those vitally important moments on the pitch. That is important for the players.

FIH: What planning and preparation has to go into getting the players ready for a tournament such as the Odisha Hockey Men’s World Cup Bhubaneswar 2018?

SK: Playing a tournament in India means we have to be very disciplined. Differences in local food and drink can present a problem for European teams. We have worked hard with our team doctor to find the best health package that will suit the players. Keeping all the players fit and healthy and in the tournament is the big aim for us this year. The temperature and climate in India will not present a problem.

FIH: What qualities can we expect to see exhibited by Germany at the Odisha Hockey Men’s World Cup?

SK: We will be focussed on winning the important matches by playing really flexible hockey. We have introduced new ideas into the squad since the Rio 2016 Games but I will not be sharing those with you at the moment!

FIH: Who are the newer members of your squad and who can we expect to 'star' for the side during the event?

SK: Our final squad will be nominated at the beginning of November. So we will see then who are the newer players with ‘star’ qualities.

FIH: The gap between the top teams is very marginal, how will you give Germany the 'edge' over the other top teams?

SK: The tournament schedule is really tough, which means you will face a world class team in the quarter- finals. Looking to other tournaments, these matches are mostly 50/50 matches. I think Germany is always good at producing its most successful performances when its getting to the important stage of the competition, the knockout stages in other words. The players are training hard to be as prepared as possible. At the end, it will be a mix of discipline, confidence, attitude and the right tactics for beating the other top teams. It is going to be tough for all the teams playing in the quarter-finals. The main title contenders, besides us, will be Australia, Argentina, Belgium and the Netherlands.

Germany will be competing in Pool D, alongside the Netherlands, Pakistan and Malaysia. They open their Odisha Hockey Men's World Cup Bhubaneswar 2018 with a match against Pakistan on 1 December. For a full schedule, plus much more information about the blue riband event, click here.