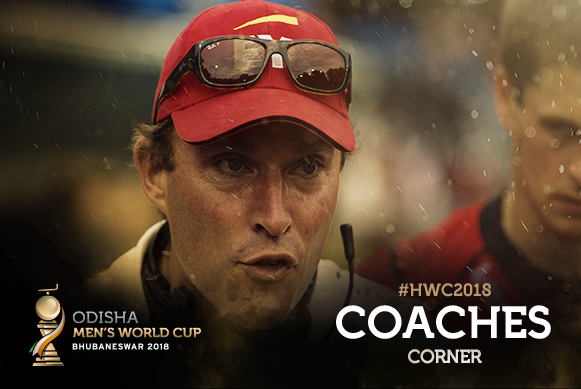 France are going to Bhubaneswar as the lowest ranked team [FIH Hero World Ranking: 20] at the Odisha Hockey Men's World Cup but that doesn't mean they are expecting to play the role of whipping boy.

Head Coach Jeroen Delmee – himself a double Olympic gold medallist with the Netherlands – believes his side are more than capable of closing the gap on the higher ranked nations after a period of preparation that has included fixtures with many of the world's top teams.

"We have a young team with players that want to give it their best in their first ever World Cup" Jeroen Delmee, Head Coach France

We caught up with the Head Coach of France as they were preparing to head overseas to India to compete in their third World Cup [they competed in the 1971 and 1990 editions, finishing seventh on both occasions].

FIH: What preparations have France been going through in the build-up to the Odisha Hockey Men's World Cup Bhubaneswar 2018?

JD: The biggest part of our preparation has been during the summer. We played a total of 15 matches against the Netherlands, Germany, Ireland and Canada. After that the players went back into their clubs for the national championships. Since September we have been training from Monday to Wednesday as two groups, one based in Brussels and the other in Paris.

At the end of October we started our final preparations for India with matches against England, where we came away with one win and one defeat. We then had a good series against South Africa, winning three matches and losing just one. Finally, we played Belgium, losing twice.

FIH: How do you mentally prepare a squad for a challenge such as a World Cup in India?

JD: The main focus has been on reaching the professional level that is necessary throughout the year. As France is a big nation, it is not possible to train together all the time. The difference comes in the periods when we are not together and the way the players work individually.

To be mentally ready to compete with the rest you have to be sure you have done your best in the way you have trained in that final period of build-up to the competition. When it comes to competing in India, the players know what to expect. They know there will be pressure, they know the crowds will be noisy.

FIH: As one of the lower-ranked teams, you will be an unknown quantity to many of the other hockey nations, can you see France surprising people as Ireland and Spain women did at the Women's World Cup?

JD: In Europe we are becoming a better known nation. We played a lot of the higher-ranked nations this summer, something that is vitally important in order to step up a level. Although we are in a tough group with Spain, New Zealand and Argentina, I do think our programme has been good enough for us to get closer to the teams that are ranked 8-12.

I don't think there is a huge difference between us and Spain and New Zealand. We could possibly produce a surprise result in our group. With some good results in the group we might get in the real flow and then everything and anything is possible.

FIH: How will you approach each pool game?

JD: Our first target is to get into the next round. I think every game will present us with good opportunities, but we have to be on top of our game. So every game we will prepare the team to win. Based on the world rankings we would have more chance in our first two matches against New Zealand and Spain. A good result there is a must. You don’t want to be dependant on a “must-win” scenario against Olympic champions Argentina.

FIH: What qualities does France have that will be of benefit at the World Cup?

JD: We have skilful and creative players. Besides that we have a young team with players that want to give it their best in their first ever World Cup. We also have a good penalty corner routine and a good goalkeeper.

We don't have the World Cup experience that some of the other nations have but most of our players competed in the Junior World Cup in Delhi and finished second during this event.

Most of our team is currently playing in the Belgian Championship, a strong competition which gives them the experience of weekly high performance matches. We also have a good group of youngsters in the team. They bring power, energy and skills to the team.

FIH: What will France need to do well to enjoy a successful World Cup?

JD: Defensive discipline is the key for us. We will play teams that are assumed to be better then us. We can not afford to give away any easy goals or penalty corners. From a well organised defence we have to switch fast into attack and use any space given to us.

FIH: How do you personally keep calm and focused at events such as these?

JD: That is mostly based on experience. I played in four world cup competitions as a player and two as a coach. It is important to remain focussed on the things I can influence; most of the time that is just our own performance. We will prepare the team as well as possible, then there are no big surprises and that makes it easier for the coaching staff to keep calm.

FIH: What finishing position would you be pleased with in Bhubaneswar?

JD:The main goal is to get into the next round but it would be a great achievement if we make it to the quarter finals.

France compete in Pool A at the Odisha Hockey Men's World Cup Bhubaneswar 2018. Their opening match is against New Zealand on 29 November. For a full playing schedule, click here.