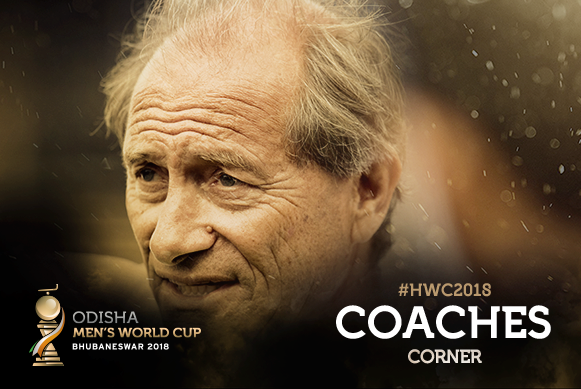 There are few more experienced Head Coaches travelling to India for the Odisha Hockey Men’s World Cup Bhubaneswar 2018 than Roelant Oltmans. The Dutchman is a highly respected coach who has plied his trade in both Asia and Europe.

As coach to the Netherlands, he led the women’s national team to world cup gold in 1990 and he repeated the feat with the Netherlands men’s team in 1998. Over the past few years Oltmans has coached India men, Pakistan men and, for the past few months, has been Head Coach to Malaysia's Tigers.

FIH caught up with the approachable coach shortly after Malaysia had taken bronze at the Asian Champions Trophy, beating Japan into third place.

FIH: What physical preparations, including matches, will the squad be going through between now and the World Cup?

RO: Now we have finished the Champions Trophy, we are back training in Kuala Lumpur for the last three weeks of preparation. We have three test matches against New Zealand in that time. We then travel to Bhubaneswar on 25 November, where we will play a friendly against France.

FIH: How are you mentally preparing the players for the challenges of a world cup?

RO: The World Cup is the last competition of 2018 and of course our team want to shine. We understand that we’re in a very difficult pool [Malaysia (FIH Hero World Ranking:12) are in Pool D alongside the Netherlands (WR:4), Pakistan (WR:13) and Germany (WR:6)], so our first aim is to get into the next round. We will try to make this happen by performing at the very top of our game. Once we achieve this aim, we will re-set our goals for the next stages.

FIH: How will you personally cope with that pressure?

I can call on years of experience as a coach. I see the team’s goals as my goals and, as coach, I am ready to coach my team and prepare the players in the best possible way. That is my only perspective. We do a lot of homework on the other teams and I encourage everyone to take some relaxation time every day during the tournament.

FIH: What planning and preparation has to go into getting the players ready for a tournament that has such a long time frame and with so much resting on each game?

RO: It is most important that the players realise from the start, that the competition needs a different approach because of the time between matches – particularly in the opening stages. We have planned a different schedule for our rest days to overcome those long breaks in play. There will be a lot of emphasis on recovery and then we will train in a different way to the way we train for other competition formats.

FIH: What qualities can we expect to see exhibited by Malaysia at the Odisha Hockey Men’s World Cup?

RO: Malaysia will be an attacking side, showing either some combination hockey or good individual play.

FIH: Since taking on the coaching role, what new dimensions do you feel you have added to the squad?

RO: In the short period of time that we have had together we’ve tried to create more clarity in our attacking and defending structure. We base the team structure around the players’ qualities.

FIH: Who will be your major challengers for a medal?

RO: It’s clear that one of the top six nations of the FIH World Ranking will be favourites for the title. I’m not sure the scenario that happened in the women’s World Cup will take place in Bhubaneswar as well, although that would be good for Malaysia. The only thing we can focus on, is to prepare ourselves in the best possible way, which means we’ve to play smartly, energetically and with confidence.