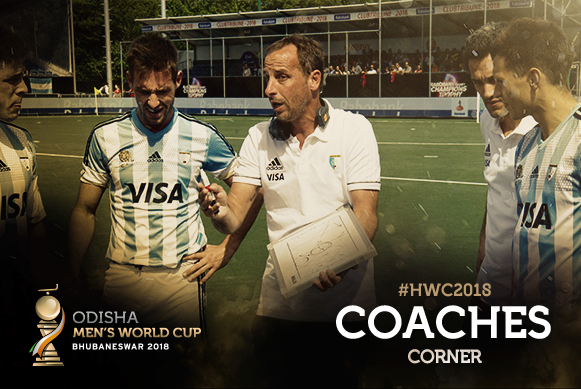 German Orozco has a strong hockey portfolio. Not only did he play for Argentina in two Olympic Games (Sydney 2000 and Athens 2004), but he also enjoyed a successful career playing club hockey in Europe, notably in Hamburg, Germany and for Orange Zwart in the Netherlands.

A fourth place finish at the Rabobank Hockey Champions Trophy in Breda perhaps wasn’t the result Los Leones were looking for in Orozco’s first foray into top-flight hockey but a win at the 2018 Darwin International in Australia most definitely was. That result saw Argentina beat, amongst others, Australia, the current world number one side and reigning World Cup champions.

“The players know that what they achieved in Rio came as a result of hard work. To repeat that success will be very difficult but we will try to build on that achievement."
German Orozco, Head Coach Argentina

In an interview with hockey.nl leading up to the Champions Trophy, Orozco said he was focusing on the Odisha Hockey Men’s World Cup Bhubaneswar 2018, and in particular, moulding together his core of experienced players and the new generation of Argentina hockey stars.

Ahead of the World Cup, Argentina have been on their travels. In July they played Germany, France and Ireland at the Real Four Nations event in Dusseldorf, where they finished second. Following this, they crossed the world to play a series of test matches against Australia before their confidence-boosting win at the 2018 Darwin International.

Ahead of the trip to India, Los Leones will be put through their paces with an intense week of training and matches at Mar del Plata, Buenos Aires.

Fitness will certainly not be an issue for the team in blue and white. Over the past few months, Orozco has made sure his players are at the height of fitness with an intensive programme of physical work on the athletics track, in the gym and pool. The players have also endured some heavy and physical technical training as they endeavour to win the title for the first time in their history. Their best finish at a World Cup was the bronze medal they won in 2014.

The mentality among the players is one of single-minded determination to win the trophy. As Orozco says: “Many of these players are Olympic champions and do not want to settle for that alone.

“The players know that what they achieved in Rio came as a result of hard work. To repeat that success will be very difficult but we will try to build on that achievement. We have taken stock of the Olympic success and we will use what worked well and re-evaluate the things we know we can do better.”

What the spectators can certainly expect from Orozco’s team is a lot of fast, attacking hockey. He has promised that his side will be “attacking” and “protagonists in every game,” although he is quick to stress that the defensive side of things will still be key to success.

The Head Coach knows the pressure is on. His side are number two in the FIH Hero World Rankings and the reigning Olympic champions. It is a weight that Orozco acknowledges: “For me, there is the pressure that comes with leading one of the best teams in the world. But this is something I will thrive on and the pressure will certainly not take my focus off the goal.”