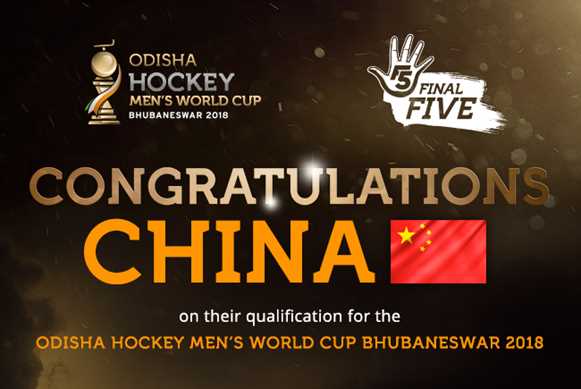 Lausanne, Switzerland: China have become the latest team to qualify for the Odisha Hockey Men's World Cup Bhubaneswar 2018 thanks to favourable results at the Hero Asia Cup 2017, which is currently being played in Dhaka, Bangladesh.

China's place was confirmed on Saturday (21 October) when Korea drew 1-1 with Malaysia, a result which put the Malaysians into the final against India.

Under FIH regulations, the team that wins its continental qualifier automatically qualifies for the World Cup. However, as both India, as hosts, and Malaysia - who finished fourth at the Hero Hockey World League Semi-Final in London earlier this year - have already qualified for next year’s showpiece, a World Cup qualification spot opened up for the team next in line that had not yet qualified for the event. That team was China, who take the ticket to Bhubaneswar courtesy of their eighth place finish in the World League Semi-Final in London.

Korea finished one place below Asia rivals China at the World League event in London, a placement that was not going to be enough for a World Cup berth. Winning the Hero Asia Cup 2017 was Korea's final chance to achieve World Cup qualification, but that dream was ended in heartbreakingly dramatic fashion. A last-gasp penalty corner from Malaysia's Faizal Saari tied the match at 1-1 to put the Malaysians into the championship match at the expense of Korea, who miss out on their first Hockey World Cup since the 1998 event in Utrecht, Netherlands.

Although it is disappointing day for Korean hockey, it is a momentous one for the men of China who have achieved World Cup qualification for the first time in their history. China are the 15th team to qualify for the World Cup, joining hosts India, Argentina, Australia, Belgium, Canada, England, Germany, Ireland, Malaysia, Netherlands, New Zealand, Pakistan, Spain and France at the prestigious 16 nation event.

The final men's World Cup qualification place will be decided by the outcome of the Africa Cup of Nations competition, which takes place between 22-29 October in Ismailia, Egypt.

The Odisha Hockey Men's World Cup Bhubaneswar 2018 will be held at the Kalinga Stadium from Wednesday November 28 to Sunday December 16, 2018.