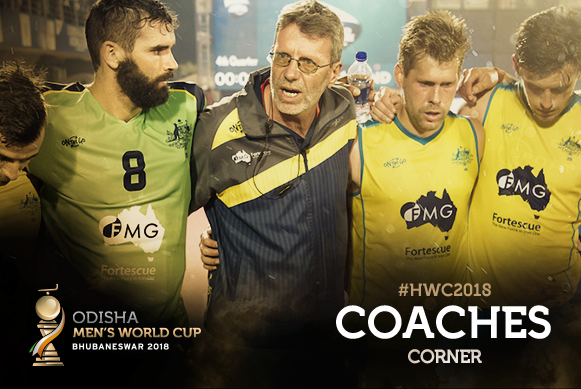 Colin Batch is aiming to lead Australia to back to back World Cup wins Photo: FIH/WSP

Being at the helm of the world’s best men’s hockey team cannot be an easy task. Expectation sits on the shoulders and every other team sees you as a target – a team to be knocked off a perch. And yet the Kookaburras Head Coach Colin Batch is a man who seems totally unflappable as he talks about the two major challenges his team faces over the next two years – the Odisha Hockey Men's World Cup Bhubaneswar 2018 and the 2020 Tokyo Olympic Games.

“We will be ready for the World Cup, although there is still a lot of work to do,” says Batch. “The men’s competition is very tough at the moment. There are very fine margins between most teams. We can’t say we are in line to have success at the World Cup: yes, we are defending champions but this is a new group and they have to find success on the field as other groups have before them.

“And of course, Tokyo is not far around the corner. It’s coming quickly. We have a young group emerging and we have to get enough experience into those players before the Tokyo Olympic Games.”

The past year has offered the Australia team a rare chance to play top level hockey on home soil. Early in the year, the Netherlands travelled to Australia to play a four-match test series against the Kookaburras, which the home side won, thanks to a 6-1 victory in the final match. They followed that up with an emphatic win at the Commonwealth Games, again on home soil – retaining the title they have won for the past six editions of the Games.

As Batch points out: “Not many teams come to Australia, so it was great that the Dutch did that. It is good for people to see one of the top teams in the world playing in Australia. And the Commonwealth Games was a great event because it was also in Australia.”

Prior to the Commonwealth Games, Australia had won the Sultan Azlan Shah Cup in Malaysia, going through the six team tournament unbeaten, before they triumphed at the Rabo Champions Trophy in Breda, despite losing one of the round-robin matches to Argentina.

“The Champions Trophy was great,” says Batch, “It proved very good preparation against teams we hadn’t seen for a while, particularly some of the European teams.”

The key to the Kookaburras' success is the winning mentality that seems to be part of the team’s DNA. For every great player that retires, another great player steps into their shoes. It is this never-ending stream of quality that has kept the team consistently in the top one or two of the FIH Hero World Rankings for such a long time. 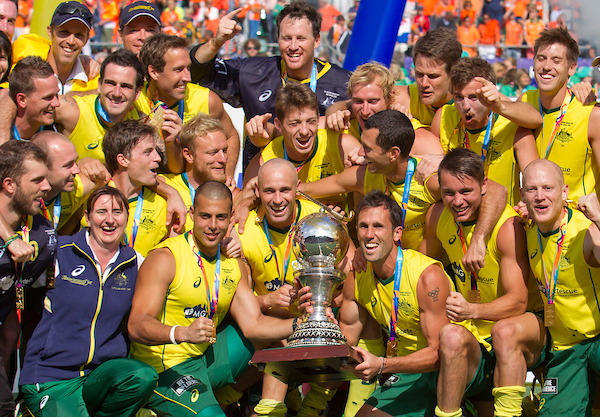 Australia will defend the title they won in The Hague in 2014 Photo: FIH/WSP

“The players just love playing for the Kookaburras,” says Batch as he tried to explain the team’s continuing gold rush. “They make themselves available every time, and that is despite it becoming harder and harder for elite players to commit to everything that is going on. We are looking forward to the FIH Pro League, but it asks for a lot of commitment. But people enjoy playing for the Kookaburras and that is why we are consistently good. People are prepared to push themselves to remain part of the squad.”

There have been some changes to the squad in the past few months with some high profile retirees, among them captain Mark Knowles. Batch acknowledges that his squad is still evolving and a number of new players are still finding their feet, but he adds, there are also some long-serving players. Eddie Ockenden is the pick of these – the attacking midfielder is the last surviving squad member from the team that won bronze in Beijing 2008.

Unlike many coaches, Batch is willing to namecheck the players he feels will be key to success at the Odisha Hockey Men’s World Cup in Bhubaneswar. “We have two outstanding goalkeepers in Tyler Lovell and Andrew Charter - that provides a good base for our defence to perform. Eddie Ockenden has played over 300 games so he is very important to us, as is Aran Zalewski in midfield – he is a bit of a midfield general for us. And Daniel Beale is getting better all the time. He is driven, he has a bit to prove but he has a real hunger.”

Talking about his team’s prospects, Batch is looking no further than the pool matches. “At this stage our focus is on Ireland, England and China to make sure we perform in our Pool before we hopefully progress to the next phase. Overall, everyone is a threat. We’ve seen at the Women’s World Cup earlier this year with how unpredictable that was. We’re expecting a very tight competition.”

Australia start their defence of the title with a Pool B match against Ireland, who are ranked at number 10 in the FIH Hero World Rankings.

For all the news from the Odisha Hockey Men’s World Cup Bhubaneswar 2018, click here.