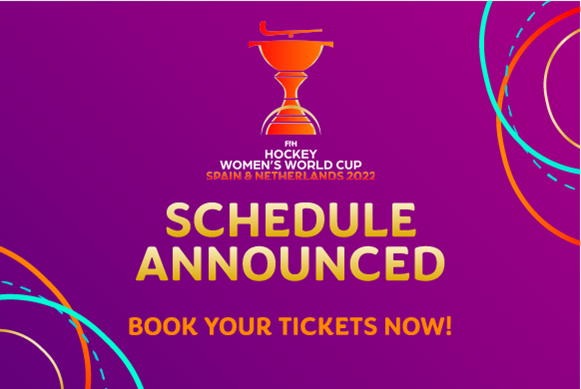 The opening match of the 15th edition of the most prestigious event in women’s hockey - alongside the Olympics – will see hosts Spain taking on Canada on 1 July 2022 in Terrassa, Spain.

Matches in Amsterdam, Netherlands – co-hosting the tournament with Spain – will start on the next day (2 July) with New Zealand playing China.

Terrasa Olympic Stadium and Wagener Stadium will host Pool matches, cross-overs, classification matches and quarter-finals, with Terrassa – which welcomed the Olympic hockey tournaments in 1992 – hosting the semi-finals, the match for the 3rd place and the final.

Another major milestone is coming to life today with the start of the ticket sales! Tickets will be sold via the following online ticketing platforms:

Fans are encouraged to book early!

16 teams are in the race to be crowned World Champions. The draw to define the Pools was done on 17 February in Terrassa, at the National Museum of Science and Technology of Catalonia:

Furthermore, the tournament’s mascot was revealed at the draw ceremony. This lovely dragon symbolizes the values of women in Hockey: passion, strength, wisdom, change, courage, vitality, protection and majesty.

All hockey fans around the world are invited to suggest a name for the mascot through a contest running until 18 March. The chosen name will be revealed on 23 March. The voting platform link is: https://bit.ly/WorldCupMascot