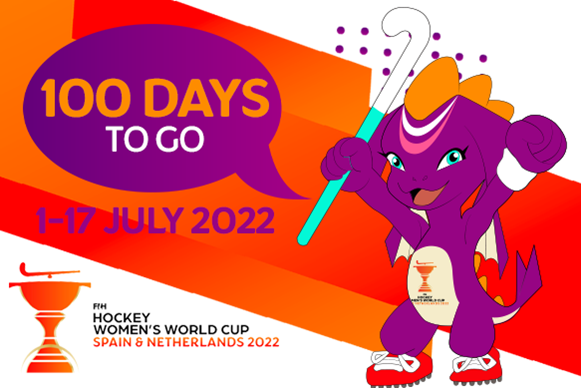 There are just 100 days to go until the FIH Hockey Women’s World Cup Spain & Netherlands 2022 springs into life at the joint venues of the Wagener Stadium in Amsterdam in the Netherlands and the Terrassa Olympic Stadium in Terrassa, Spain.

The 16 teams know both their pools and the opponents that stand between them and World Cup glory. The officials are primed and ready to ensure a smooth running and fairly contested tournament. The fans are busily purchasing tickets ready to roar on the athletes in this blue riband event, that will not only set pulses racing in the stands, but will captivate global audiences.

Ahead of the event, fans across the international community were asked to suggest names for the competition’s mascot. Showing some truly astonishing creativity 400 names were suggested, which was eventually whittled down to just three. More than 600 votes were cast and the final, winning name for the 2022 World Cup mascot was revealed as Lyla. Look out for Lyla as she makes starring appearances over the duration of the tournament and at both venues.

Whether the matches are in Spain or Netherlands, the fans and the teams will feel well looked after, as two of the events organisers explain.

Whether it is ‘Hi, how is it?’ or ‘Hola amigo, que tal?’, fans and players are assured the warmest of welcomes when they arrive for the hockey extravaganza.

Viktor Brouwer is the chairman of the organising committee from the Netherlands and former international Spanish hockey star Berta Bonastre is tournament director in Spain.

‘Having an event like this in my own city means such a lot,’ says Bonastre. ‘Visitors to Terrassa will experience far more than solely the World Cup, there will be children’s events, special hockey going on, beach hockey also. Apart from that, in the fan zone there will be concerts and other activities. This will be an event that goes far beyond the hockey.’

‘After two years with no hockey celebrations, it is going to be great to give a huge hockey party to the fans,’ says Brouwer. ‘And of course, Amsterdam is a great city. You can have a canal tour, there are so many little bars and restaurants, outside the city, you can visit the tulip fields, there is so much to do.’

Both Bonastre and Brouwer promise terrific atmospheres in both cities. ‘I have in mind the final from 2018 between Ireland and the Netherlands,’ says Brouwer. ‘Whoever is on the pitch, the Dutch will always support every team.’

Bonastre adds: ‘The Spanish people love to cheer. The stadium will be jumping, particularly when Spain are on the pitch.’

And, with the anticipation and excitement bubbling through their smiles, the captains of the Netherlands and Spain have these messages for the supporters:

Xan de Waard of the Netherlands says: 'In 100 days the World Cup starts in Amsterdam and Terrassa. The next few months see us play several games in the FIH Pro League to prepare as well as possible. We are really looking forward to start the World Cup and we hope to see you there.'

Spain's captain Georgina Oliva says: 'I would like to encourage all the fans and the crowds to come to Terrassa because there are a lot of activities waiting for you. I would love to see you all in the stadium, enjoying the hockey and the spectacle of a World Cup. We will welcome you with a lot of sunny days.

Tickets are being sold via the following online ticketing platforms: