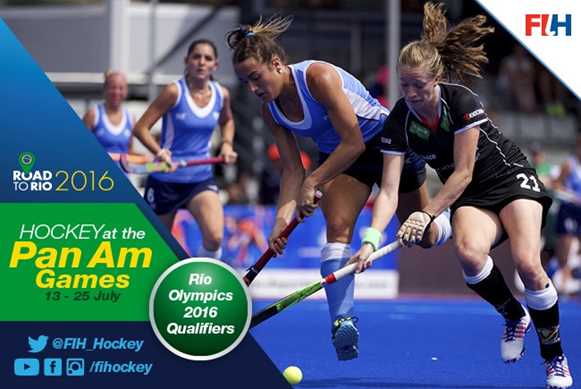 Pan Am Games: the contenders for the women’s hockey title

Argentina and the USA may be favourites for the title, but others are determined to have their say.

It really is winner takes all at this year’s Pan Am Games, as the first placed team will not only be crowned continental champion but will also book a ticket for the 2016 Rio Olympic Games.

There are eight contenders in the women’s competition, playing in two pools.

Here we take a brief look at each of teams.

Pool A
Argentina are ranked third in the world and will be most people’s favourites to win this competition. Las Leonas have already booked their place at Rio courtesy of a fourth place finish at the Hockey World League Semi-Finals in Valencia earlier this year. This will not mean that Argentina will rest on their laurels. Delfina Merino is very efficient in front of goal, although her partner in front of goal, Carla Rebecchi is missing through injury. However, with Agustina Habif leading a strong defence and Agustina Albertarrio taking an increasingly dominate role in midfield, this is a team that has rebuilt and is improving with every outing.

Canada have two new tools in their locker: the benefit of home support and the recent experiences gained at the Hockey World League Semi-Finals. Although they are ranked 20th in the world, Canada have been mixing it with the highest ranked teams of late. The team competed against Great Britain, China, Germany and Spain in the Hockey World League – all matches that gave the players a taste of fast, intense hockey many of the squad had not previously experienced. Expect Kate Gillis and her squad to come out all guns blazing.

Mexico are ranked 27th in the world and have a young and relatively inexperienced squad. Captain Michel Nallely Navarro Hernandez is the most capped player with 67 caps and 12 of the squad are under 25 years old. However, coach Arely Castellanos is happy with the team’s preparations and will be eyeing Dominican Republic and Canada as teams Mexico can gain points from. Mexico’s best finish at a Pan Am Games was fourth place in 1991; the team in red and green will be looking to match that this year.

At 51, the Dominican Republic are the lowest ranked team in the tournament. They do come to the contest as silver medal winners from last year’s Central American and Caribbean Games and their confidence will be high as a result. The team has only competed in one previous Pan Am Games, in 2011, where they finished eighth but, in line with FIH’s plans to extend and develop hockey in more nations, the Dominican Republic is a youthful hockey nation in transition.

Chile are ranked 22 in the world and have high hopes of a medal according to head coach Alfredo Castro. Four of his side play in Europe and bring that experience to the competition. Captain Camila Caram has a wealth of experience and Daniela Caram was top scorer at the recent Hockey World League Round 2 event. The past three editions of the Pan Am Games has seen Chile finish fourth, fourth and third. Expectations of matching or bettering that are high in the camp.

Cuba, ranked 43 in the world, have performed consistently at the past two editions of the Pan Am Games. A fifth-place finish in 2007 was followed by a sixth-place in 2011. With no player holding more than 30 caps, this is the most inexperienced team at the Games, and Coach Alain Lopez will be looking to Captain Mileisis Quintana and most capped player Brizaida Perez to lead the young team against their more experienced rivals.

Uruguay – ranked 29th – come to the Pan Am Games on the back of a learning curve courtesy of the Hockey World League Semi-Final. In Valencia the squad played on a water-based pitch – something not available in Uruguay – against teams ranked more than 20 places higher. That they were competitive against teams such as South Africa and Ireland bodes well for Uruguay at this Pan Am Games.

Holders of the title, USA, come to Toronto on the back of a disappointing Hockey World League Semi-Final – they finished fifth. They know that winning the Pan-Am Games is the only way they can guarantee a place at Rio 2016. Key to their success will be rediscovering their scoring powers – but there is enough experience in the squad for the USA to put the Hockey World League disappointment behind them and seek to emulate the moment four years ago when they beat Argentina and qualified for London 2012 in the process.