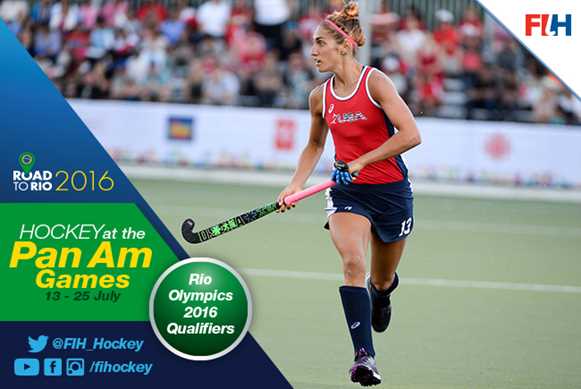 Team USA are celebrating after a fabulous win over their south American rivals Argentina means they retain the title they won in 2011. The Women's  Hockey competition at the Pan American Games has come to its conclusion with USA taking gold, Las Leonas silver, while the home crowd were given plenty to cheer as Canada took bronze after a close encounter with Chile.

In the earlier sessions, Uruguay fought back from a goal down to force a shoot-out before defeating Mexico to claim 5th place, while Dominican Republic edged their way past Cuba to finish in 7th place.

More details on all the matches can be found below.

7-8 classification match: Cuba 1-2 Dominican Republic
Dominican Republic finished their 2015 Pan American Games competition on a high by defeating Cuba to take 7th place in Toronto. The Cubans put up a brave fight before going down 2-1, ending the tournament in 8th position. Dominican Republic took the lead in the 19th minute when Magalys Ortega netted from open play, with Cecilia Oflaherti doubling the advantage four minutes after half time. Cuba scored a consolation goal in the final minute of the match, with Yuraima Vera Rojas bagging her second goal of the competition ahead of full time.

5-6 classification match: Mexico 1-1 Uruguay (2-3 SO)
Uruguay claimed 5th place at the Pan American Games in Toronto courtesy of a shoot-out victory over Mexico, who finished the competition in 6th position. The two sides played out a hugely entertaining, drama-filled contest, with Mexico taking the lead midway through the second quarter through Marlet Correa, although the most dramatic moments arrived in the third period. In the 42nd minute, Mexico’s Karen Orozco and Florencia Norbis of Uruguay were both shown yellow cards, a situation which proved to be more beneficial to the Uruguayans who dragged themselves level two minutes later thank to a penalty corner from Cecilia Casarotti. In the shoot-out, Mexico only managed to convert two of their five efforts, with Uruguay netting three of their four attempts to seal the win without needing their full shoot-out quota of five.

The medal might not have been the colour they had dreamed of, but Canada were able to give the home fans a podium place to cheer after they defeated Chile in a hard-fought bronze medal match.

The opening minutes of the match suggested that Chile might produce an upset as Francisca Vidaurre and Sofia Walbuam spearheaded a lively Chilean attack. The momentum began to turn the way of the North American team as they soaked up the pressure and then began to make chances of their own but the Chilean defence was resolute and the score at half-time remained 0-0.

Both sides ramped up the pressure as the game ticked towards its conclusion. The quality of defending by both teams suggested that one goal would probably be enough and so it proved. In the 51st minute, Brienne Stairs finally managed to find a way past Claudia Shuler in the Chilean goal, a well-placed shot from a penalty corner. Both Schuler and Kaitlyn Williams in the Canadian goal had been outstanding throughout the match, and it was williams who saved from Caroline Garcia in the final minute of the game to preserve the lead and take the medal.

A stirling performance by Jackie Briggs in goal and two well-executed penalty corners were enough for the USA to retain the title of Pan-Am Champions at the expense of Argentina. This was always going to be a tightly-contested match; neither team had conceded a goal throughout the entire tournament and had scored at will during earlier games. For USA this was a sweet revenge for the defeat in the Hockey World League Semi-Finals at the hands of their South American neighbours – a result that had put Craig Parnham’s team in some doubt over qualifying for Rio 2016.

The match itself was a see-saw affair, with both teams creating pressure. Argentina got off to the better start, winning two penalty corners in quick succession in the opening minutes. Briggs was equal to the challenge and the momentum changed, with Lauren Crandall and Katie Reinprecht both coming close for USA. Crandall also performed her defensive duties well, on one occasion stopping an almost certain goal from Delfina Merino.

At half-time it was still goalless, and it took a beautifully worked penalty corner to break the deadlock – Belen Succi was drawn out of position by the swift interchange of passes leaving Katie Reinprecht (34’) with an empty goal to slot home. This advantage was doubled five minutes later through a penalty corner shot whipped home by Michelle Vittese. Las Leonas reduced the deficit in the 57th minute when Florenica Habif scored from a penalty corner. A flurry of attacks from the blue and white team put the USA defence under enormous pressure, but Briggs in particular was in imperious form and at the final whistle it was USA who celebrated.

Keep up with all of the action on www.panamhockey.org. #PAGhockey15 #TO2015 #RoadToRio