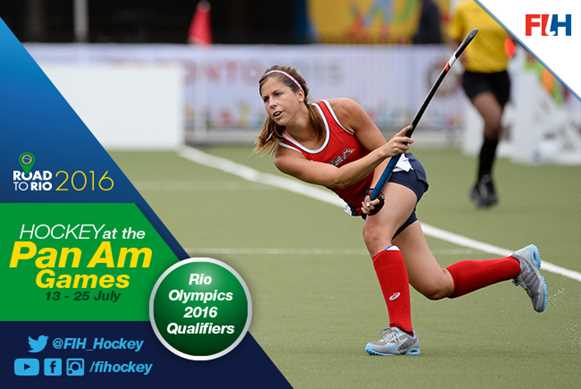 Teams on the hunt for a ticket to Rio at Pan American Games in Toronto, Canada

Women’s Day 3 at the Pan American Games Hockey competition in Toronto saw USA confirm their status as the winners of Pool B, while Chile took second place in the pool with an important victory over South American rivals Uruguay. In Pool A, Argentina made it three wins out of three with a big win against Dominican Republic before Canada confirmed a second place finish by seeing off Mexico.

The coveted Pan American Games Gold medal comes with a direct qualification ticket to Rio 2016, ensuring that there is a huge amount at stake in this illustrious competition. More details on the matches can be found below.

Pool B
USA 12-0 Cuba
Craig Parnham’s USA finished Pool B with a 100 percent win record courtesy of a comprehensive victory over Cuba that saw nine different players make their mark on the scoreboard. The result confirmed USA’s place at the top of the pool, meaning that they will face the team that finishes bottom of Pool A in the quarter-finals. The ever-impressive Katie O’Donnell opened the scoring in the second minute, with Paige Selenski doubling the advantage ahead of a second quarter that saw Melissa Gonzalez, Rachel Dawson, O’Donnell and Jill Witmer take the score to 6-0 at half time. The scoring sequence was repeated after half time, with two goals coming in the third quarter through Michelle Vitesse and Katie Reinprecht before Katelyn Falgowski, Michelle Kasold, Gonzalez and Witmer netted the four goals in the final quarter to complete the match scoring. USA - who currently sit 5th in the FIH World Rankings - have been in sparkling form in Toronto, and look more than capable of defending the Pan American Games title that they won in Guadalajara in 2011.

Uruguay 0-3 Chile
The race for second place in Pool B was won by Chile, who claimed a very significant win over Uruguay thanks to goals from Sofia Filipek, Manuela Urroz and team captain Camila Caram. The two teams came into the match locked together on three points, and therefore knew that the result would have a significant impact on who they would face in the quarter-finals. The victor would be guaranteed a meeting with the third ranked team from Pool A, while the loser would faced a potentially trickier game against Pool A’s runner up. First quarter goals from Filipek and Urroz gave higher-ranked Chile a lead that they were never to surrender, with Uruguay battling hard but failing to find a way past Chilean goalkeeper Claudia Schuler. The result was put beyond doubt 11 minutes from time, with captain fantastic Camila Caram firing home a penalty corner to seal a crucial victory for Chile over their South American rivals.

Pool A
Argentina 12-0 Dominican Republic
Pool A winners Argentina made it three wins out of three by outclassing Dominican Republic on the occasion of team captain Macarena Rodriguez’s 200th international appearance. Las Leonas were on fire in the first two periods, opening up an eight goal advantage ahead of half time thanks to strikes from Noel Barrionuevo (2), Agustina Albertarrio, Pilar Romang (2), Rocio Sanchez, capain Rodriguez and Delfina Merino. Maria Ortiz and Julia Gomez took the score to 10-0 moments after half time, but excellent defensive work from Dominican Republic reduced Argentina’s all-stars to just two additional goals, with Sanchez and Luciana Molina on target in the fourth quarter. In the quarter-finals, Argentina will face Pool B’s bottom placed team Cuba, while Dominican Republic’s fourth place finish in Pool A sets up a meeting with Pool B winners USA.

Mexico 0-4 Canada
Canada secured a second place finish in Pool A by defeating Mexico to set up a quarter-final meeting against Pool B’s third placed team Uruguay. For Mexico, the result sets up a quarter-final meeting with Chile, who finished second in Pool B. Following a goal-less opening quarter, Canada asserted their authority on the match with trio of strikes in the second period, with Karli Johansen, Thea Culley and Hannah Haughn putting the North Americans into a 3-0 lead at half time. Haughn wrapped things up in the fourth quarter with a field goal to complete the scoring.

Keep up with all of the action on www.panamhockey.org.