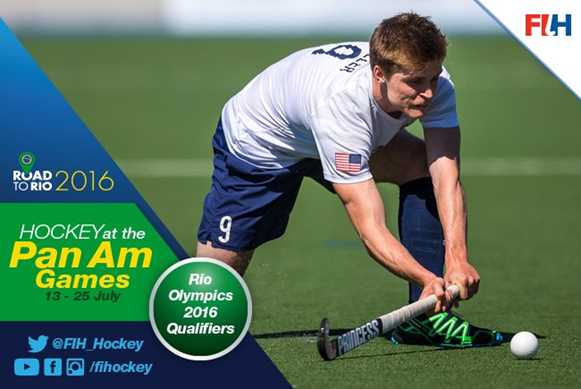 One is on 200 caps, the other has less than 25, but both Lauren Crandall and Adam Miller have high hopes for Toronto

We talk to two athletes who have been counting down the days until they can get on the hockey field at the Pan-Am Games and make their mark.

23-year-old Adam Miller played hockey for England at under 16, 18 and 21 level, but then he decided to try out for Team USA, courtesy of his dual nationality.

Miller made his debut for Team USA last year, playing in a series of test matches against Mexico, Chile and Argentina.

Looking back he says those test matches were the best hockey experiences he has enjoyed so far and his ambition is to play in an Olympic Games as a member of Team USA.

Miller works and lives in England so he has to do much of his training by himself or with teammates from his club side.

He explains what his current training workload looks like: “The lead up to the Pan Am Games is unfortunately in the off-season in England which has made it difficult to get regular team training. I was able to get on the pitch every Tuesday and Thursday, where I did speed and fitness sessions before practising basic stick skills on my own or more complex drills with any friends that fancied coming along.

He continued: “Our team philosophy in the build up to the Pan American games has been’no off days’, and so every day I did 30 minutes of maintenance such as stretching, foam rolling and core exercises. Since June, I have been with the squad doing full-time training in preparation for the Pan- Am Games.”

A common theme with Team USA hockey players, both males and females, is the importance of being part of the team and always putting team first. Miller is no exception.

He said: “Our main aim when we play matches is for every individual to understand their own role within the team. Then our only individual aim is to take care of that role and that role alone. This is why being around our teammates in preparation for a competition is hugely important. Plus it’s the main reason why team sports and particularly playing for this squad is so much fun. The squad is extremely supportive, honest and open to each other… almost too open,” he laughs.

When it comes to recognising the importance of a good performance at the Pan-Am Games, no-one will be wanting to win more than USA captain Lauren Crandall.

In the Pan-Am final four years ago, Team USA were on the verge of breaking the hearts of Argentina and its passionate supporters.

This time around, victory is essential because first place in the Pan-Am Games guarantees qualification for Rio 2016.

Putting aside this pressure, Crandall recalls that day back in July 2011. She said: “We had done all the preparation prior to the game, so it was just a matter of performing. We were relaxed but excited. We all went through our typical pre-game rituals: some of us played some games; others listen to music together in the locker room.

“As we got out on the pitch, I remember the crowd was loud and there were a lot of Argentinian fans; there was a section of fans with a drum that kept beating. But the best noise I heard all game was when that drum stopped and the American fans began to roar.”

The USA had a dream start as they took a two goal lead and at half-time they were 3-1 up. But with Argentina’s Las Leonas there is always the chance of a comeback.

It wasn’t until Michelle Vittese made it 4-2 in the 66th minute of the game, did Crandall and her teammates dare to dream.

“Each goal we scored added more momentum to the game. But it wasn’t until Michelle put away our fourth goal that we knew we were taking that game.

“After our team celebration I remember jumping the fence and grabbing an American flag from the crowd and running down the field holding it. My teammates and I sprinted over to our Men’s National Team who were there supporting us and thanked them for their support - they were loud and amazing.”