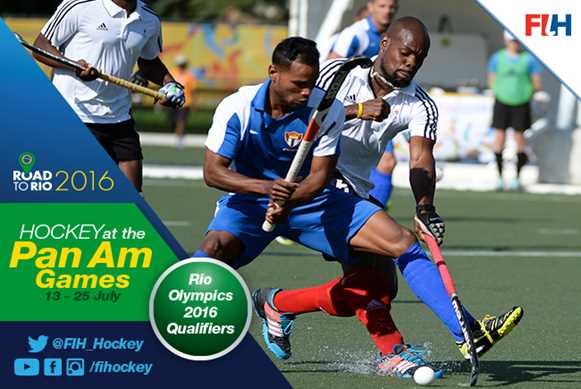 PAG2015 (M): Retegui’s Argentina tighten grip on Pool A and Canada remain top of Pool B

Teams on the hunt for a ticket to Rio at Pan American Games in Toronto, Canada

The morning session of men’s Day 2 at the Pan American Games Hockey competition featured two Pool A matches, with Trinidad & Tobago drawing with Cuba whilst Argentina’s Los Leones made it two wins from two by defeating USA.

The afternoon session featured two Pool B matches as Brazil scored the only goal of the game to beat Mexico. They were followed by Chile and Hockey World League Finalists Canada, again one goal separating the two as Canada took the points.

More details on the matches can be found below.

Pool A
Trinidad & Tobago 2-2 Cuba
A late goal from Solomon Eccles gave Trinidad & Tobago a share of the points against Cuba, who lead on two occasions before eventually having to settle for a 2-2 draw. The result left both teams searching for their first win, although Cuba remain unbeaten having also drawn with USA in their opening match. Cuba opened the scoring in the 22nd minute with a perfectly executed penalty corner drag-flick from Yoandy Blanco, a lead that they held until nine minutes from the end of the match when a blistering strike from Akim Toussaint restored parity and set up a dramatic finale. The ever-dangerous Blanco restored Cuba’s lead with another penalty corner effort - his fourth goal of the competition - before a last-gasp penalty corner from Eccles gave T&T their first point of the competition.

USA 0-6 Argentina
Argentine penalty corner ace Gonzalo Peillat scored twice as Los Leones continued their impressive start to the Pan American Games with a comprehensive victory over USA. It was a second successive win for the South American giants, enough to guarantee their position as the winners of Pool A with a game to spare. in the quarter-final phase, they will face the team that finishes bottom of Pool B. Agustin Mazzilli and Manuel Brunet gave Argentina a 2-0 lead at half time before Peillat and Facundo Callioni both registered in the third quarter. Peillat’s second penalty corner effort found the goal two minutes into the final quarter, with Nicolas Della Torre adding a sixth goal to ensure that Head Coach Carlos Retegui’s dream of winning a Pan American Games Gold medal as both a player and a coach remains very much alive. As a player, Retegui won Gold in 1991, 1995 and 2003, with his 1995 team featuring two iconic coaches of the modern game - Max Caldas, Head Coach of the Netherlands, and former Argentina women’s Head Coach Gabriel Minadeo, who guided Las Leonas to Pan Am Gold in 2007.

Brazil 1 Mexico 0
With both teams looking for their first win, it was Mexico who won the first penalty corner of the match which they were unable to convert.  With both teams defending well, it was still 0-0 going into third quarter.  The deadlock was then broken when Mexico lost possession and although Brazil’s first shot on goal was blocked by Mexico’s keeper Moises Varga, Brazil’s Lucas Paixao followed up to score and take the lead.

Mexico attacked hard in the final quarter but Brazil keeper Rodrigo Faustino stood firm saving several shots.  Brazil then had a last minute opportunity but the shot went wide.  However, the final result 1-0 to Brazil was enough to earn them their first Pan Am Games win and three points.

Canada 1 Chile 0
Hockey World League Finalists Canada confirmed their position at the top of Pool B with a narrow 1-0 victory over Chile.  With both teams winning their opening pool games on Tuesday, all eyes were on this match. In a close game it was a goal from Scott Tupper in the 54th minute, his second of the Games that separated the two.

Keep up with all of the action on www.panamhockey.org.