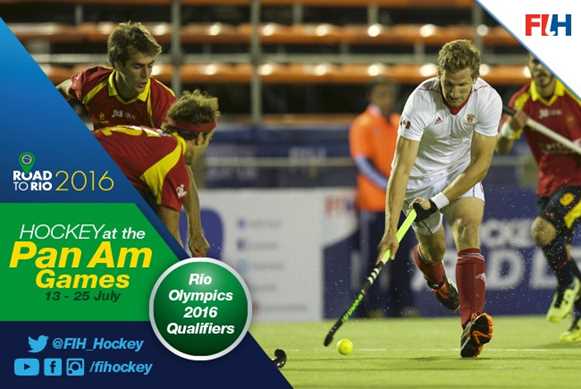 Canada's aiming for Rio 2016 with the help of sports analyses

Canada's dreams of Olympic qualification are one step closer thanks to good results at the recent Hockey World League Semi-Final in Buenos Aires. Whilst they have not qualified yet, winning the Pan Am Games hockey competition in their homeland will guarantee them a ticket to Rio 2016.

Paul Mounter is one of a number of backroom staff employed by Canada Field Hockey to support the players as they enter some of the most important days of their playing careers.

His role is team analyst, assessing training and match videos and relaying that information to the coaching team so they can monitor their own players and gather information about their opponents.

As he explains, as team Analyst at a hockey event, Mounter puts in more pitch time than the players. "On tour it's long days. There are four games during a day, which means 10 hours at the pitch and then analysis on the day's play, both on ourselves as well as future opponents.

"A typical day will see me up at 6am to get things from the day before finished off. We then head to the pitch, where we film and code four games before heading back to the hotel. Add additional analysis and then we head to bed around 1-2am to get up at 6am and repeat."

While Mounter has a day job, in the weeks leading up to a tournament, much of his spare time is spent preparing for the forthcoming event. This usually involves some work with the team – around two mornings a week – but a lot of analysis of other teams.

It was an injury that forced Mounter into the role of Performance Analyst. He sustained damage to his anterior cruciate ligament (ACL) in 2004 and so turned to coaching. As someone with a science and technology background, he quickly embraced video in his own coaching. When a position became vacant with Field Hockey Canada, he was a natural fit for the role.

With Canada flying high at the moment, Mounter is certain that increased use of analysis has played its role in the team's success. He said: "This tournament (HWL Semi-Final), the analysis that we have been doing has gone beyond what we've been able to do in the past. Having a second analyst on tour has meant that we have been able to look into much greater detail how we have played and what our future opponents have done during the tournament. The additional work has proven to be a big difference for the guys and the confidence they feel going into each game."

While more and more teams are using video analysis to a greater extent, Mounter sees this as an area that remains largely untapped. "There just aren't enough hours in the day to do what we want to do. We have to strike a balance of what we can achieve and stay functional and what we want to do. As we say in the video tower, there is no such thing as a rest day - they are just long days without games to analyse."