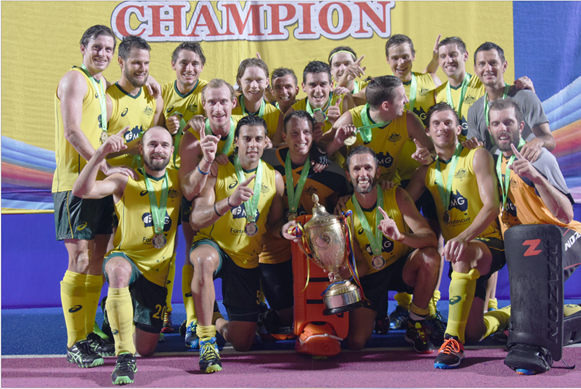 Ahead of their Hockey Champions Trophy and Olympic title challenges later this year, reigning world champions Australia produced a dominant display to win the Sultan Azlan Shah Cup for a record ninth time at the 25th edition of the famous invitational tournament in Ipoh, Malaysia.

Man of the Match Thomas Craig and Matt Gohdes both scored twice in the gold medal game as the top ranked team in world hockey made a clear statement of intent regarding the year ahead.

Australia’s captain Mark Knowles said that it was a sweet moment to regain the title following their agonising shoot-out defeat at the hands of the Black Sticks last year.

“Australia is highly competitive and in every tournament that we are in, we want to win it”, said the defender and 2014 FIH Player of the Year. “India were great opponents, so kudos to them. This is a good start for our Olympics preparation. We played against top class sides and we will now look at our strengths and weaknesses and work on them.”

As expected, the Silver Jubilee edition of this action-packed men’s invitational competition was another high quality occasion, with all seven of the competing teams placed inside the top 20 of the FIH World Rankings.

Sadly, the competition proved to be a heartbreaking one for host nation Malaysia, who missed out on the bronze medal due to a shoot-out defeat against New Zealand’s Black Sticks. Malaysia squandered a 2-0 lead before eventually seeing the match tied at 3-3 thanks to a final minute penalty corner from New Zealand’s Kane Russell, before the Kiwis claimed a 5-4 win in the shoot-out.

Pakistan took fifth position with a 3-1 win over Rio 2016 participants Canada, with Japan’s Samurai's finishing the competition in seventh place.

19-year-old Kookaburras striker Blake Govers - who missed the Hero Hockey World League Final 2015 through injury – was named as the Player of the Tournament, with the Goalkeeper of the Tournament award going to New Zealand shot-stopper Kyle Pontifex. Pakistan’s Muhammad Arslan Qadir finished the event as the tournament top scorer with six goals, one ahead of Malaysian penalty corner expert Razie Rahim.

About the Sultan Azlan Shah Cup
The Sultan Azlan Shah Cup has been an annual feature in the FIH calendar since 1998, although it initially started life in 1983 as a biennial event. The event is named after legendary hockey fan and former FIH Executive Board Member HRH Sultan Azlan Shah, the ninth Yang di-Pertuan Agong (King) of Malaysia, who sadly passed away in 2014. Although the man known as “the father of Malaysian Hockey” is no longer with us, both his name and legacy lives on in this ever entertaining competition.

To catch up on all of the action from the 25th Sultan Azlan Shah Cup, click the links below.