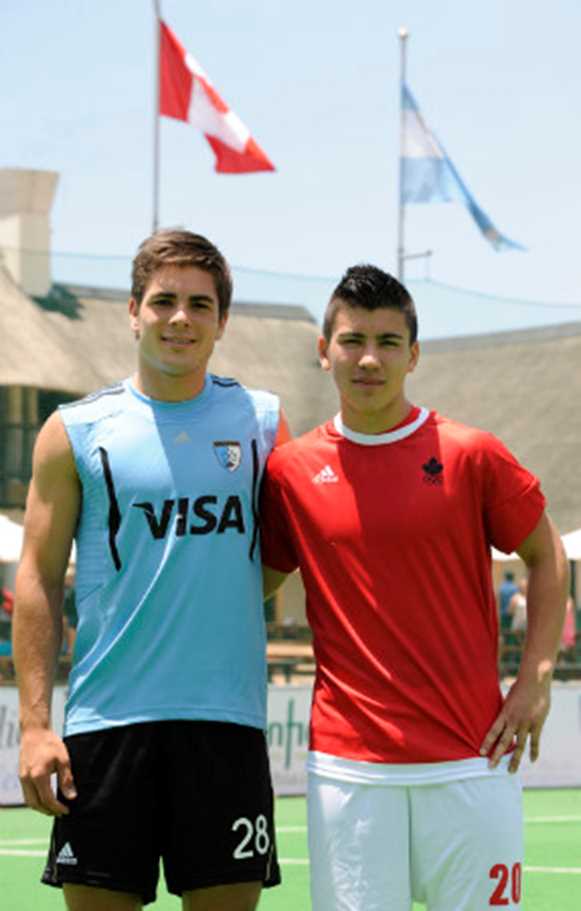 Visiting Africa is a dream come true for Gonzalo Peillat from Argentina and Canada’s Gabriel Ho-Garcia, two of the youngest players in the Champions Challenge 1 in Johannesburg. Neither had played a senior international before arriving in the city and they share a common language – Spanish.

Both starry-eyed youngsters can’t quite believe they’re in Africa sharing an experience they will remember for the rest of their lives. Wide open spaces, wild animals and a major tournament is the stuff of fairy tales.

Ho-Garcia, 18, has already made his mark scoring his first international goal in only his second game for Canada (in their 3-2 loss to Argentina) while Peillat is still chomping at the bit to win his first cap.

Fluent in Spanish and English, Ho-Garcia just grinned when he revealed he could understand all the Argentinians were saying on the pitch, going as far to confess that he would willingly have traded his goal for a Canada victory.

If you’re wondering about the Canadian’s surname it is an amalgamation of his Hong Kong Chinese father’s and his Madrid-born mother. “I keep saying to myself, Wow! it’s happening” he laughed. “Africa has certainly lived up to my expectations of being really hot, multi-cultural and the animals for sure – I can’t wait to see lions and elephants.”

Both players commented on the friendliness of the locals with Peillat, 19, a first year architecture student in Buenos Aires adding: “The scenery is so beautiful and I love all the mountains around the ground. I might be a bit nervous before I make my debut but this is why I’m here and what I want to do.”

Ho-Garcia, a Business Administrations student in Vancouver, admitted he couldn’t contain his excitement when he was told by Canada’s head coach he had been selected for the tournament. “It was such a big thrill” he said. “I only wish my Mum and Dad had been here to share it all with me and watch me play my first international.

Peillat, who names Argentina team mate Juan Pacheco and former star Mario Almada among his heroes not to mention football ace Lionel Messi, won’t be waiting in the wings for long. He is, said a source close to the team, a wonderful talent.

The pair will no doubt continue to do battle over many years as they pursue their international careers – Ho-Garcia as a striker taking on defender Peillat. But for now, all they’re thinking about is crowning a memorable hockey experience with a visit to a game park.