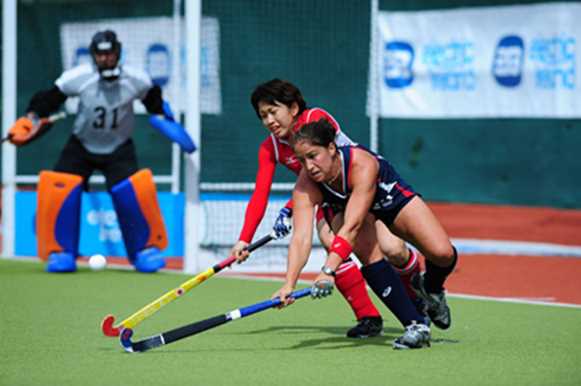 Japan got their ESB Electric Ireland FIH Champions Trophy I campaign off to a winning start thanks to a 2-1 victory over the USA.

The 10am game here in Dublin exploded into life right from the very start, with Japan gaining the early initiative when Ai Murukami dispatched a wonderful penalty corner drag-flick beyond the reach of USA keeper Jackie Kintzer after just two minutes of play.

The USA immediately went on the offensive and drew themselves level inside the ten minute mark thanks to a moment of individual brilliance from the excellent Katie O’Donnell, who made a crucial deflection on a high shot which she accurately guided into the Japan goal.

Much of the first half was an entertaining, end-to-end affair, which was enjoyed by the early morning visitors to the venue here at University College Dublin.  However, the latter part of the half was dominated by the USA, who went close to gaining a half time advantage through great efforts from Torrie Albini and the lively O’Donnell.

Japan began the second half of the match very much as they did the first, and went close to scoring on a couple of occasions but were denied by excellent defensive work from USA. Eventually though, Japan found a breakthrough in the 45th minute when a pass into the circle took a wicked deflection, looped over the heads of the USA defenders before falling to the waiting Rika Kamazawa who casually volleyed into the goal from close range.

Although there was an element of luck about the strike, it was no more than Japan deserved at that stage of the game. However, it only served to rally the US team into action. The Japanese defence was called into action on a number of occasions, denying the US from two penalty corner attempts before goalkeeper Sakiyo Asano pulled off a solid save from Claire Laubach. It was Laubach who went closest to leveling the scores with five minutes remaining when she saw her penalty corner flick palmed onto the crossbar by the diving Asano before the ball was cleared to safety.

Paige Selenski had a great chance to tie the scores in the final minute but failed to beat the excellent Asano with her reverse stick shot, with Japan holding onto a nervy but hard-earned victory.